Thousands of protesters have taken to the streets in Bavaria ahead of a G7 meeting set to start this weekend. Activists have said world leaders have repeatedly failed to act on pressing global issues. 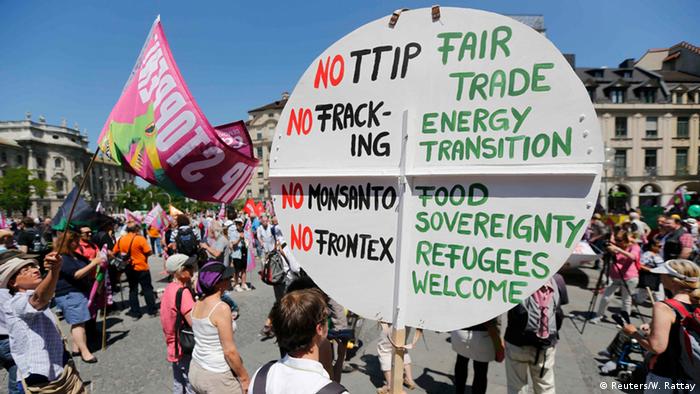 The leaders of the world's seven most industrialized countries - Britain, Canada, France, Germany, Italy, Japan and the United States - will bring staff of hundreds to the Bavarian town of Elmau, but they will be vastly outnumbered by the thousands of protesters taking to the streets ahead of and during the two-day G7 summit, which begins Sunday.

The main demonstration ahead of the summit took place Thursday in Munich, the Bavarian capital, some 100 kilometers (60 miles) outside of the G7 venue. Environmentalists, globalization opponents and other protesters issued demands on everything from international trade agreements, poverty reduction and fighting climate change to rescuing migrants who take to the seas in rickety boats hoping for a better life.

"The representatives of the richest and most powerful countries in the world lay claim to decide the fate of the entire world, without having any legitimization for this," the group Stop G7 Elmau 2015 wrote on its website. "The G7 politics means neo-liberal economic policies, war and militarization, exploitation, poverty and hunger, environmental degradation, and [shutting out] refugees."

Police in Munich have said they expected 15,000 protesters, while organizers put the number at between 10,000 and 30,000, according to Bavarian public broadcaster BR.

Some 15,000 police officers will be on duty in Bavaria during the summit. Police spokesman Wolfgang Wenger called on protesters to be reasonable. "We do not take a political position, instead we protect basic rights," he said. "Injuring police by throwing stones, kicking or hitting them is completely unacceptable." Germany has also instituted temporary border checks through mid-June with its neighbors in the Schengen area of visa-free travel.

TTIP the major object of ire

The Transatlantic Trade and Investment Partnership (TTIP), a trade deal under negotiation between Europe and the United States, has been a focal point of criticism. Despite appeals from German Chancellor Angela Merkel to support the deal, a survey showed that some 43 percent of Germans say the agreement would be bad for their country. Scores of demonstrations against the trade pact have been held across Europe.

Previous demonstrations at the 2007 G8 summit, which included Russia and was the last meeting held in Germany, resulted in protesters clashing with police in Rostock and Hamburg, leaving dozens of police and protesters injured and leading to more than 120 arrests.