At a weekend meeting of the G7, finance ministers of the world’s seven most-important industrial nations issued a statement calling for more solid exchange rates – the strongest move yet to stop the plummeting dollar. 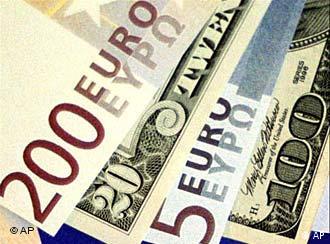 Finance ministers around the world would like to see parity between the dollar and euro.

Without directly mentioning the dollar, the ministers said the recent major fluctuations of exchange rates were undesired. European politicians had urged the drafting of a position that would help slow the rapid climb of the euro, Europe’s common currency. They fear longterm weakness of the dollar could delay growth of the European market by reducing the number of exports to the United States, Europe's biggest trading partner.

"Excess volatility and disorderly movements in exchange rates are undesirable for economic growth," the statement read. "We emphasize that more flexibility in exchange rates is desirable for major countries or economic areas that lack such flexibility to promote smooth and widespread adjustments in the financial system, based on market conditions." The statement added that the countries would closely observer the currency markets and cooperate as appropriate.

"No further statement is necessary," said Eichel. "The fact that we’re unified means a lot, and the financial markets will recognize that."

The formulation marked a victory for the Europeans, who have been concerned about damage to the export market as a direct result of the dollar’s weakness. During the past two years, the dollar has lost about 29 percent of its value.

It also served as the strongest indication yet that Europe may be close to intervening to stop the drop of the dollar. One possibility, though shunned by the Americans, is that Europe could buy up dollars in an effort to shore up the currency's exchange rate. 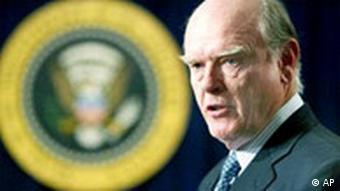 But at the meeting, U.S. Treasury Secretary John Snow (photo) sought to play down the current exchange rates.

"A strong dollar is in our national interest," Snow said. "But the relative values of currencies are best established in open competitive currency markets. Nobody can devalue their way to prosperity."

Instead, he said the G7 should focus on further stimulating the global economy. "We have a growth deficit," he said. The finance ministers and central bank leaders from the U.S., Canada, Germany, France, Great Britain, Italy and Japan all signaled that the economic prospects are steadily improving around the world, but there is still much work to be done.

In Europe, Eichel said, it is crucial that countries take on additional reform measures, like German Chancellor Gerhard Schröder’s "Agenda 2010" plan, which seeks to implement major structural reforms. Though the German economy is currently showing signs of growth, additional reforms are needed to keep the positive momentum, the government has argued. "Agenda 2010 has played a large and positive role," Eichel said.