India's foreign minister had to pull out of G7 talks after he was possibly exposed to the coronavirus. The pandemic was high on the list as G7 foreign ministers continued with their first face-to-face meeting in years. 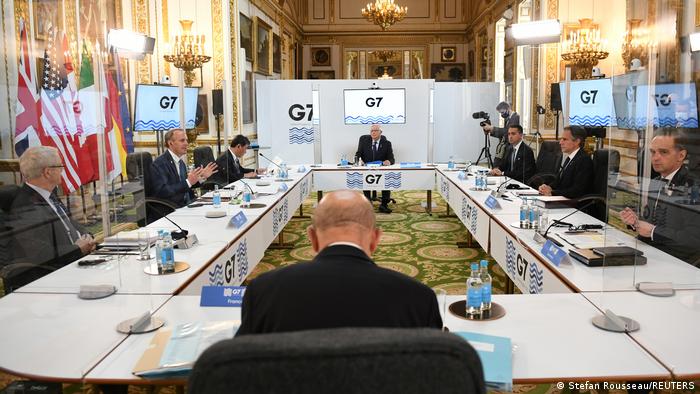 G7 talks in London on beating the coronavirus pandemic were overshadowed on Wednesday as India's foreign minister, Subrahmanyam Jaishankar, went into self-isolation amid fears he had come into contact with possible COVID-19 cases.

"As a measure of abundant caution and also out of consideration for others, I decided to conduct my engagements in the virtual mode. That will be the case with the G7 meeting today as well," Jaishankar wrote on Twitter.

On Monday, Jaishankar met US Secretary of State Antony Blinken on the sidelines of the summit. But the US State Department said it saw no risk arising from the meeting.

"We will continue to follow the guidance of public health professionals going forward and abide by the same strict COVID-19 protocols," spokesman Ned Price said.

India is not a member of the club of wealthy nations, but was invited along with South Korea, Australia and South Africa as a guest for the second day of the three-day summit.

Foreign ministers of Britain, Canada, France, Germany, Italy, Japan and the United States are setting the agenda for a G7 leaders' summit next month in Cornwall, southern England.

The talks, which have observed social distancing rules, are taking place in London because the UK currently holds the G7 presidency.

But much of their focus have been on how to secure fairer access to vaccines for the developing world.

Rich countries told to step up on vaccine aid

In a joint-statement issued on Wednesday evening, the G7 foreign ministers pledged to work with companies to boost the production of affordable COVID-19 vaccines. They also agreed to financially support COVAX, the international vaccine sharing program.

The statement, however, stopped short of calling for pharmaceutical companies to waive intellectual property rights on the jabs.

Wealthy countries have so far been reluctant to give up precious stocks of life-saving jabs until they have inoculated their own populations. The G7 is being urged to do double efforts to raise vaccines and share doses with lower- and middle-income countries.

The group of wealthy nations slammed Russia and China over their approach to international law and human rights.

In their joint statement, the foreign ministers said they were "deeply concerned" about "Russia's irresponsible and destabilizing behavior" after Moscow sent troops to Ukraine's borders and Crimea.

The seven governments also hit out at Beijing's "targeting of Uyghurs, members of other ethnic and religious minority groups."

They pointed to the existence of a large-scale network of "political re-education” camps, and reports of forced labor systems and forced sterilization.

US Secretary of State Antony Blinken met with his Japanese and South Korean counterparts on the sidelines of the G7 meeting as the trio vowed to push North Korea back to the negotiating table.

"They ... agreed on the imperative of fully implementing relevant UN Security Council resolutions by UN member states, including North Korea, preventing proliferation, and cooperating to strengthen deterrence and maintain peace and stability on the Korean Peninsula," Price was quoted as saying by Reuters.

US President Joe Biden's administration issued a policy review on North Korea, calling for practical progress with Pyongyang as opposed to the summits with leader Kim Jong Un that were carried out by former US President Donald Trump.

US open to 'practical' diplomacy with North Korea

The White House says Joe Biden is aiming for a realistic approach towards North Korea's denuclearization rather than his predecessor's "grand bargain" strategy.

A senior White House official said the US has a "role in beating the pandemic globally." The program has gotten off to a slow start in distributing vaccinations to poor nations.