Görlach Global: China is capitalizing on the COVID crisis | Europe | News and current affairs from around the continent | DW | 05.02.2021 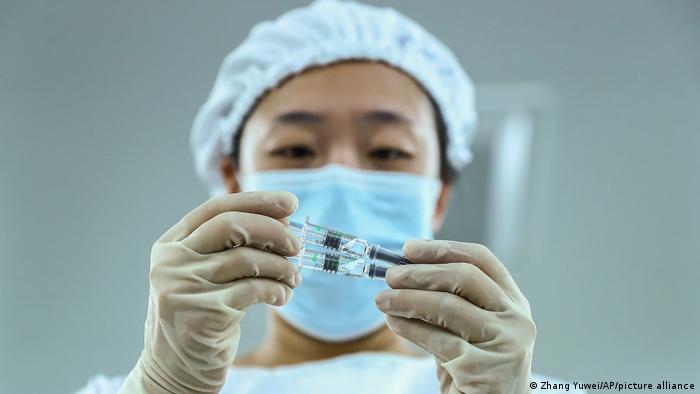 When face masks were getting scarce in the free world, China stepped up to the plate. Now, with a dearth of vaccine doses, the autocratic state is once more offering its help.

China has progressed from mask to vaccine diplomacy, so to speak. Only the naive will assume China's altruism stems from compassion alone. In reality,  however, China's delivery of vaccines, first to Serbia — and now Hungary, has caused alarm in Western capitals all the way from Washington to Berlin. China's altruism is a clever move in the ongoing battle of political systems.

China's nomenclature is convinced that the country has weathered the pandemic so well because decision-making is not hampered by rival parties nor free elections. Chinese leader Xi Jinping persistently claims that the Communist party has been so effective in fighting the pandemic because of its combination ofConfucianism and "Chinese-style socialism."

Tongdong Bai, a professor of philosophy at Shanghai's Fudan University, believes in the superiority of the Chinese model. His study Against Political Equality: The Confucian Case, argues that the inherent weakness of Western democracies stems from the principle of universal suffrage, granting adults the right to vote on, and ultimately decide, issues they do not always fully understand.

This argument is sometimes fielded in the West, when proponents argue governments should rely on expert advice alone without consulting parliament. In 2011, Italian President Giorgio Napolitano tasked Mario Monti to form an expertocracy to steer the country out of the eurozone crisis.

Italy's party system, after all, is notoriously fractured, which complicates political decision-making processes. Controversially, however, none of Monti's cabinet members belonged to any party. A fact that plays well with supporters of the Chinese political model.

Tongdong Bai, for instance, argues that democratic systems should limit elections to the local level. He says that as decision-making becomes more abstract, one should hand over power to a meritocratic expertocracy — precisely what the Communist Party of China imagines itself to be.

China has weathered this pandemic better than nations of the free world, which are struggling with a drop in economic productivity and rise in employment. China's economy, in contrast, has bounced back.

Even former US President's Donald Trump four-year trade war left China's economy unharmed. Foreign investment in China remains high — even though we know it keeps 1 million people locked up in concentration camps in its northwestern periphery. China's exports have returned to pre-pandemic levels and domestic consumption has increased.

In light of this situation, European leaders are rightfully concerned that the sluggish vaccination rollout across the EU could lead to widespread disillusionment with the bloc.

China always lacked the kind of soft power — the ability to influence and persuade — the US marshaled in the second half of the 20th century. US music and films, for example, transported the notion of the American way of life to peoples far and wide, and in the process piqued their interest to learn the English language.

A poll conducted among Germans during Trump's last year in office revealed that America's popularity is in decline – and China's on the rise. China's recent mask and vaccine diplomacy will amplify this trend.

China's popularity could also grow in other regions of the world currently neglected by the European states fully occupied by combating the pandemic at home. The US will return to its former standing under US President Biden's leadership. It will, however, remain preoccupied with containing the pandemic at home, after Trump's incompetence allowed it to get out of control.

If coronavirus vaccines from Europe and North America are only available in white-majority countries, other countries will have to wait — or turn to China. This would, however, seriously diminish the degree of soft power wielded by the West and undermine the appeal of democratic governance.