The residents of the evacuated Japanese town of Namie near the crippled nuclear plant in Fukushima were contaminated with radiation. They have now taken the responsibility for their health into their own hands. 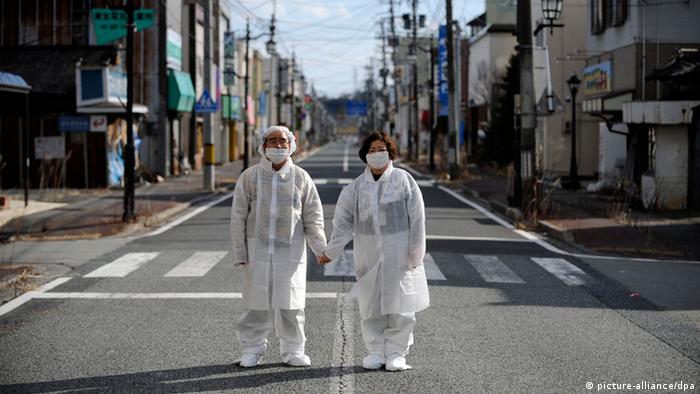 When Minako Fujiwara tells the story of her dog which died last June, she still gets sad.

"Hair around the dog's neck came off and its skin turned black," the 56-year-old told DW. Similar symptoms were also detected in animals in Chernobyl following the nuclear catastrophe there in 1986. Fujiwara's family had to leave the dog behind when they were ordered to leave the town of Namie, located nine kilometres (5.6 miles) north of the crippled Fukushima Daiichi nuclear plant. The pet probably died of high radiation.

Fujiwara has so far not experienced any health problems except for high blood pressure. But Shunji Sekine, a physician in Namie, believes the radiation will eventually have a negative impact on public health.

In his medical practice in the city of Nihonmatsu, where around 230 relocated families are situated in a settlement, Sekine has been examining the thyroid glands of Namie citizens on a daily basis ever since the nuclear incident three years ago.

"Children and young people are particularly vulnerable to the uptake in radioactive iodine in their thyroid," the 71-year-old doctor told DW.

"Although comprehensive studies are missing, I see a connection between nuclear accidents and the occurrence of cancer," said the retired physician who specializes in thyroid and breast cancer, adding that there are simply too many cases. 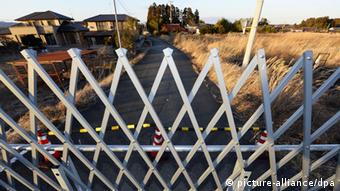 A fence marks the exclusion zone in Namie, some nine kilometers from the crippled nuclear plant

According to official figures, 33 cancer cases have been identified in about a quarter of a million children and teenagers since the beginning of February.

This translates into 13 cases for every 100,000 inhabitants, a figure almost four times higher than the world average for all age groups. Nevertheless, the government of the Prefecture of Fukushima refuses to publish any relevant details about the prevalence of cancer. Information requests made by Sekine pertaining to previous cancer cases among children and the degree of contamination remain unanswered, with authorities citing data protection laws.

But Shunichi Yamashita, Japan's top thyroid expert and health advisor to the prefectural government, plays down the issue. "We still need to conduct further investigations, and the time is not yet ripe for making any statement on this issue," he said.

But the city of Namie does not want to wait for government support - and once again become victims of a state blackout. Only four days after the explosion of the nuclear reactor, orders were given to evacuate the town of Tsushima in the northwest. This led to the refugees being transported through the invisible radioactive cloud, resulting in even more exposure to contamination than if they had stayed at home. Officials in Tokyo knew this from their computer models. But they remained silent, as they feared a widespread panic.

This traumatic experience has led Namie to collect as much data as possible on the effects of radiation, says local health inspector Norio Konno. "We want to be able to properly monitor the physical condition of our residents," he said. In case compensation claims were to be filed against plant operator Tepco, evidence is needed that will stand up in a court of law. 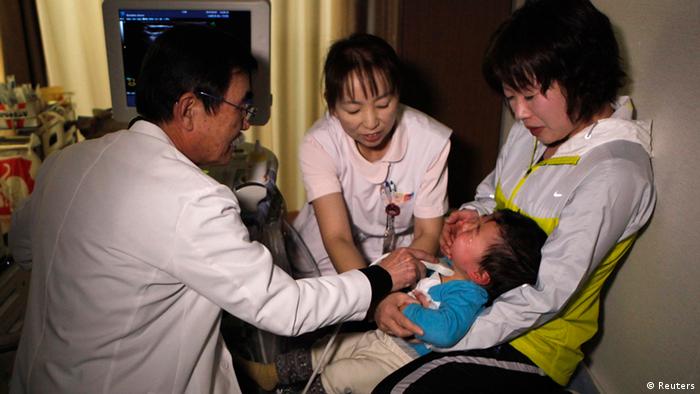 Doctor Sekine examines the thyroid gland of a toddler

This is why Namie decided to provide a full-body scanner to the residents of the Nihonmatsu settlement. All people under 40 years of age can use the device once a year to measure the amount of cesium 134 and 137 in their bodies. By comparison, the Japanese state offers this service only once every two years.

'Victims have no future'

About half of the town's population refuses to take part in the examination. Kazue Yamagi, for instance, says her 21-year-old daughter doesn't want to undergo a thyroid exam. "Ever since she left Fukushima, she has avoided watching the news on TV. She doesn't want to get married and says there is no future for victims of radioactivity," Yamagi told DW.

Shutting down Germany's nuclear power plants is going to be atrociously expensive. Experts also doubt the funds set aside will be enough to cover the costs of scrapping the plants and their radioactive waste. (18.02.2014)

The idea is perhaps not as far-fetched as it seems. To this day, the "Hibakusha," as the surviving victims of the atomic bombings of Hiroshima and Nagasaki are called, have been marginalized in Japan, together with their descendants. This is why local health inspector Konno demands legislation designed to support the victims of the disaster. "The people of Namie also feel like Hibakusha, like radiation victims."

Konno therefore decided to issue radiation passports to all residents, just as the ones used inHiroshima and Nagasaki. A column in the passport reminds of the need to do a medical check-up for leukemia.

Two cases of thyroid cancer have been confirmed among the 3200 young residents of Namie. Shinji Tokonami, a radiation expert at Hirosaki University, was surprised by the findings. "That is more than expected", he said, adding that the reason behind this might be the increased precision of the measuring instruments.

The expert has a theory as to why the number of thyroid cancer cases is not higher. He believes the iodine-containing seaweed consumed by the coast dwellers somehow prevents the thyroid glands of many youngsters from being affected by the radioactive iodine from the crippled nuclear plant.