In the six months since the Fukushima disaster, a global survey has detected mounting opposition to nuclear energy, especially in Asia. Yet Germany remains the only country to abandon the technology to date. 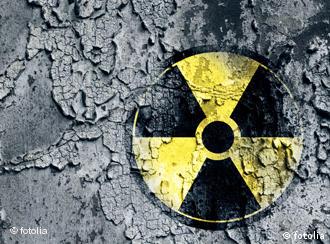 Atomic energy has lost much of its shine since Fukushima

Several months after the nuclear disaster in Japan, market research company Ipsos asked citizens in 24 countries how they feel about atomic energy.

In all but three of them - India, the United States and Poland - there was consensus that the time has come for cleaner, safer sources of power.

Many of the 55 percent who expressed opposition to nuclear energy cited the reactor catastrophe in Japan as the reason why they were against nuclear power.

The most notable shift was in Asia, where several countries including South Korea, Japan and China have seen the number of anti-nuclear activists double in recent months.

Those are same countries that have major nuclear expansion plans. At the start of this year, Japan's 55 reactors covered some 29 percent of its power needs. Tokyo was planning to add another 14 plants to its network.

In South Korea, 21 reactors currently supply 35 percent of the energy, and there are another 11 plants in the pipeline.

China and India, each of which generate just 2 percent of their fuel from nuclear power, were planning 77 and 23 new reactors, respectively. 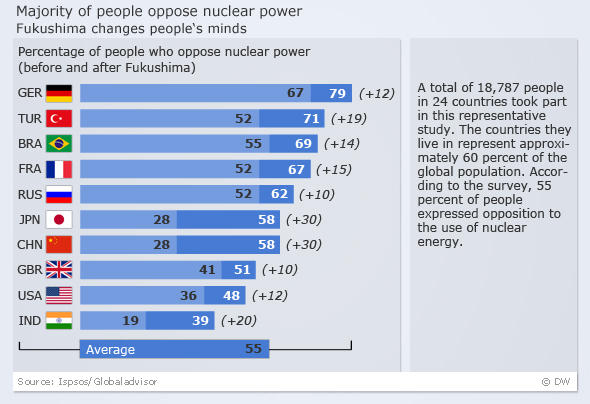 Since the Fukushima disaster, more people are expressing anti-nuclear sentiment

Many nations had grand plans for nuclear power, and - until a few months ago - had the blessing of their people who would be using the energy.

But the earthquake and tsunami that ravaged Fukushima has changed that.

Most notably in South Korea, where opposition to the CO2-free source of energy has tripled since the March 11 catastrophe.

Even Asian politicians have been shaken by the sudden realization that they are not immune to the possibility of such accidents, not least because their security standards are generally lower than those that existed in Japan.

China responded to the disaster by imposing a moratorium on the construction of new plants, but there is every chance that it will be lifted down the line.

The United States is the world's largest producer of nuclear power and meets 20 percent of its energy needs with the technology.

No new reactors have been built in America since the 1980s. The country narrowly escaped its own disaster in 1979 when a series of breakdowns put the plant near Harrisburg out of control for weeks. The reactor melted down but did not lead to a hydrogen explosion. 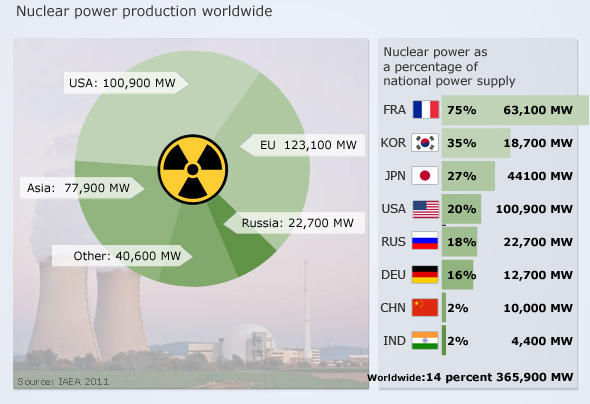 Some countries said they would continue with nuclear, others are phasing it out

Despite Fukushima, there are plans to build four new nuclear reactors in the United States.

A survey published in the daily paper USA Today says 53 percent of the population believes withdrawal from nuclear energy would jeopardize energy supplies.

In European nuclear history, Chernobyl was a defining moment.

On April 26, 1986 an explosion and fire at the Ukrainian plant leaked huge quantities of contamination into the atmosphere.

The response of some Western European governments was to shut down their reactors and stop construction of new ones. However, others - like France and Germany - did not change course, though the disaster paved the way for the German anti-nuclear movement.

In light of growing energy demands - and the need for electricity free of carbon emissions - the continent's nuclear lobby had been hoping for something of a renaissance in the coming years. But Fukushima appears to have shattered that dream.

Within weeks of the disaster, Germany, which is the EU's second largest nuclear power producer, announced its decision to close its plants permanently.

A third of the country's reactors were decommissioned immediately, others will be wound down by 2022.

Berlin's decision was met with a mixture of enthusiasm and horror by its European neighbors.

While the majority of EU citizens reject nuclear power, the decision is disastrous for the nuclear industry and major energy companies. It may also have serious implications for the country's goal of radically reducing its carbon emissions.

France, which meets 75 percent of its energy needs with nuclear power, and exports large amounts to boot, will be particularly badly affected by the consequences of Fukushima and Germany's sudden change of tack.

But the glue that has so long bound the French population to its unwavering belief in the virtues of atomic energy has begun to come unstuck.

Even the country's nuclear security authorities concede that there is no way of ruling out a serious accident at home.

Fukushima: The trigger for the rethink

More than two thirds of French citizens, and even the head of the country's socialist party, Martine Aubry, have now joined the country's Greens in calling for a withdrawal from the technology.

Conservative President Nicolas Sarkozy has, however, shown no signs of buckling under public pressure.

The situation in Russia is similar.

Although President Dmitry Medvedev and Prime Minister Vladimir Putin ordered thorough checks of all existing and planned nuclear plants, they do not want to abandon the nuclear power industry, which they hope will have a positive effect on the country's economy.

According to Anton Khlopkov, director of the Center for Energy and Security Studies in Moscow, Russia's nuclear industry can expect contracts to the tune of $100 billion (69 billion euros) by 2030, and does not want to lose them.

But the findings of the Ipso survey suggest that the Russian people are unimpressed with the numbers. Some 62 percent of people reject nuclear power, which has much to do with Chernobyl.

Even if reactors were 100 percent safe, experts have long warned of the economic risks they pose.

Member of the European Parliament for Germany's Greens Rebecca Harms said it currently costs about 7 billion euros to build a new nuclear power plant. Add to that a further 1 billion euros in dismantling costs and 600 million euros for final storage of radioactive material, and it is an expensive business indeed.

By comparison wind and solar power are cheap. If the Ipsos study is accurate, they are also exactly what 90 percent of citizens from 24 countries around the world want.

Twenty-five years after the Chernobyl disaster, Eastern Europe is still clinging to nuclear power. The anti-nuclear movement is essentially non-existent, but experts say 'green' energy is still a viable alternative. (23.04.2011)