From Scorpions to Beethoven: Ursula von der Leyen's playlist for the army 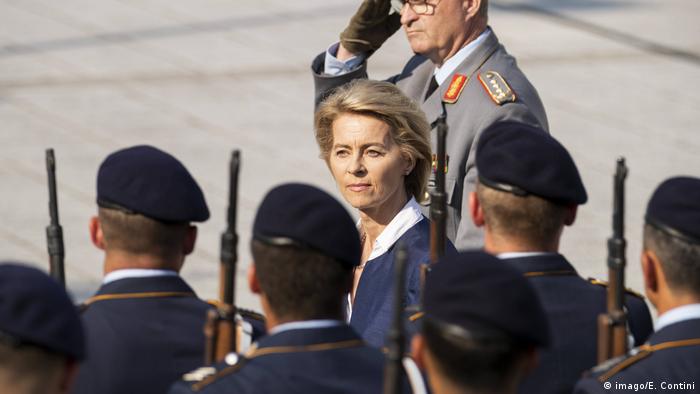 The military tattoo known as the Grosser Zapfenstreich is a nearly 200-year-old ceremony executed by the German armed forces on national celebrations or public commemorations, as well as to honor distinguished persons. Soldiers march and bear torches, and the military band plays a selection of songs.

Germany's outgoing chancellors, presidents and ministers of defense typically receive such honors. As Minister of Defense Ursula von der Leyen leaves the office to become President of the European Commission, it's her turn to select the playlist of three to four songs — as required by tradition — to be performed during the "Serenade" section of the ceremony held on Thursday.

The selected songs add a personalized touch to the stiff ritual; they are the main statement of a ceremony devoid of big speeches. They also offer insight into the politician's musical tastes. 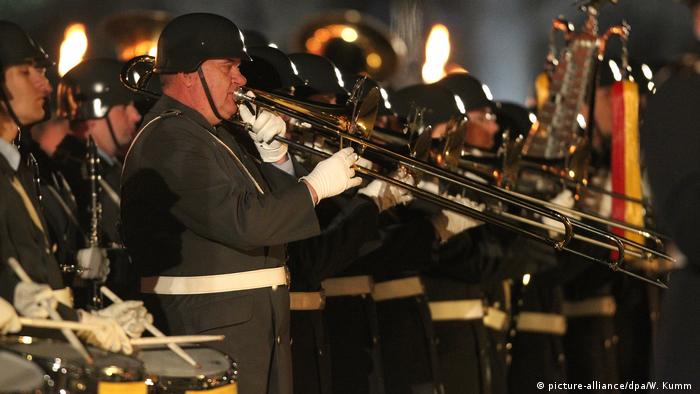 A centuries-old ritual: the Grosser Zapfenstreich

A look back: From 'My Way' to 'Smoke on the Water'

Admittedly, rock classics in such a formal context appear out of place, but the outstanding military brass band of 100 musicians is known to remain true to the original no matter what the style.

For the departure of Chancellor Gerhard Schröder in 2005, they offered a stylish version of "My Way" by Frank Sinatra. The self-confident and polemical politician even had a tear in his eye during the trumpet solo.

Defense Minister Karl-Theodor zu Guttenberg made a final statement by picking Deep Purple's rock classic "Smoke on the Water." The politician was forced to resign in 2011 after it was revealed that he had plagiarized his doctoral dissertation. The hard rock fan brought the Bundeswehr brass band to produce unfamiliar sounds.

There seemed to be a touch of self-irony in one of the songs chosen by Thomas de Maizière in 2014: "Live is Life," a 1984 song by Austrian group Opus. De Maizière's term of office from 2011 to 2013 was quite turbulent and ended with the Euro Hawk drone debacle. 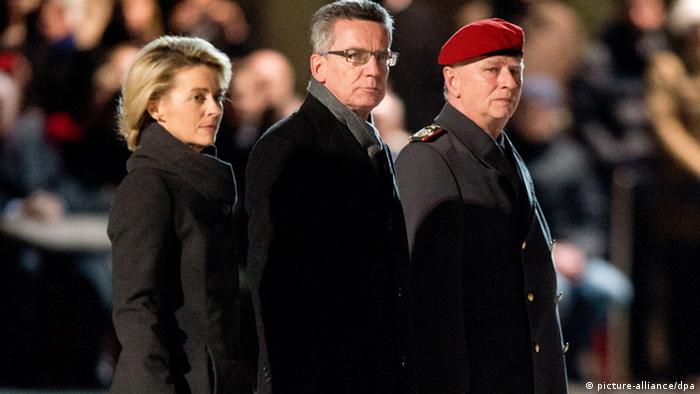 Von der Leyen alongside her predecessor at his Zapfenstreich ceremony

The soundtrack of change

In office since 2013, she aimed to reform the structures of the army, which is perhaps why "Wind of Change" is among her requests. Written in 1989, the power ballad that celebrated the Soviet perestroika unexpectedly became the hymn of the end of the Cold War. "The song was only sketching the hopes of the times; it was a snapshot of how things were changing," Scorpions singer Klaus Meine once told DW.

Ursula von der Leyen's "wind of change" came at a high cost however: Under her leadership, the defense budget rose from €21 to 43 billion ($23 to 48 billion). Equipment was modernized, the Bundeswehr restructured and its inventory digitized. In 2017, after different cases of right-wing extremism were uncovered, she also faced criticism from the top brass when she said that "the German army has an attitude problem, and it has apparently weak leadership at different levels" — a clumsy comment coming from the top leader of the armed forces. 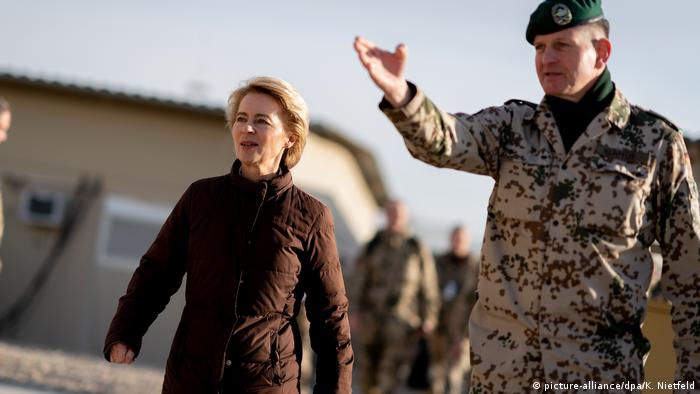 The defense minister's traditional Christmas visit to the troops in Afghanistan, in December 2018

Beyond the symbolism of the song, von der Leyen shares another tie with the Scorpions: They are from Hanover and she lives on a family estate in the Hanover region.

Von der Leyen grew up in a Protestant home and integrated her faith in her political work. In 2017 for instance, the defense minister gave a sermon at a peace service for Protestant Church Day. Her selection of "Ave verum corpus," one of Mozart's most famous works, the musical setting of a medieval prayer in Latin, can therefore be seen as a reflection of the Christian values of the 60-year-old politician.

The third title on her playlist is a direct reference to her new position as President of the European Commission:  "Ode to Joy," the main melody from the last movement of Beethoven's Ninth Symphony, also known as the European anthem.

While her musical selection shows she is looking forward to the next big step in her career, her former position will continue to haunt her: A parliamentary investigation is currently looking into von der Leyen's role in a spending scandal through which her ministry allocated contracts to external consultants worth hundreds of millions of euros.

It's therefore not too surprising that she didn't include any classic military march in her concluding musical statement, unlike, for example, her predecessor Guttenberg, who was reluctant to leave office.