From baubles to swastikas: Christmas tree ornaments across three centuries

For the first time, Berlin's German Historical Museum is showcasing Christmas tree decorations over the centuries. From traditional glass baubles to Nazi emblems, some of the festive adornments will surprise.

When you think of the Berlin's Deutsches Historisches Museum (German Historical Museum), emperors, kings and other imposing historical figures spring to mind. Few people know that the museum actually has a vast collection of Christmas tree ornaments.

A close look at the objects in the current exhibition, "Angel, Swastika, Dome of the Rock: Christmas Tree Decorations from the 19th Century until Today," reveals that such adornments can be more than merely festive, shiny decorations at Christmas time. They can be politically significant, too.

The more than 500 objects dating from the 19th century to the present are on display from November 30 to March 3, 2019 — and they tell vastly different tales. 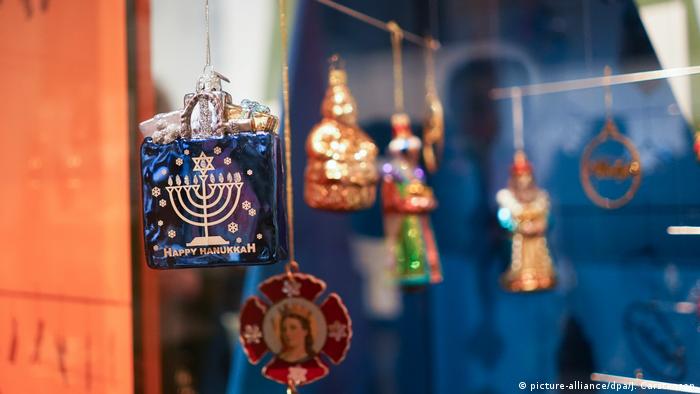 The handmade wooden angels from the Erz Mountain region are reminiscent of pristine, idyllic scenes, while shiny colorful balls and tinsel represent the more commercial side of Christmas. Meanwhile, Swastikas and other Nazi emblems illustrate how the fascist regime tried to appropriate the holiday for its own propaganda ends.

The exhibition is further proof that the ornaments with which Germans have long chosen to decorate their Christmas trees are becoming ever more international, due in part to globalization, migration and the internet.

Click on the above gallery for a look at more Christmas tree decorations over the centuries as part of the "Angel, Swastika, Dome of the Rock: Christmas Tree Decorations from the 19th Century until Today" exhibit in Berlin's German Historical Museum.

It seems Germany practically invented Christmas — or at least many of the symbols associated with it. While we don't like to start thinking about it in the summer, the cookie bakers and tree growers have to. (31.08.2018)

Winter marks the start of a magical time of Christmas markets in Germany. The festive bazaars attract millions of people, including DW's Eesha Kheny who visited Cologne for her very first Christmas market experience. (28.11.2018)