Thousands of people have been displaced amid renewed clashes between Myanmar's army and a rebel group in the country's remote northeast. One militiaman said it was the worst violence the region had seen in five decades. 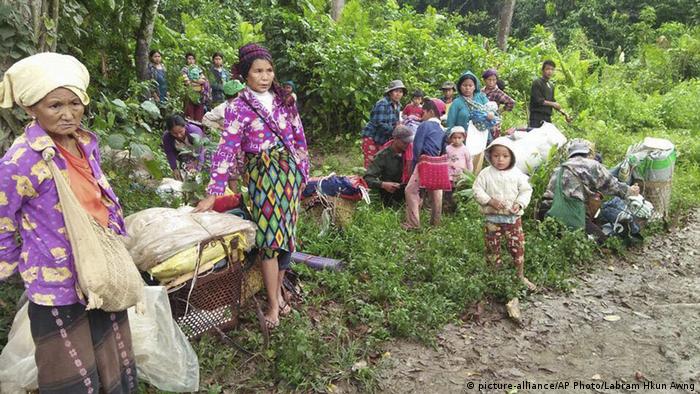 A flare-up in fighting between government troops and ethnic insurgents in Myanmar's northern Kachin province has prompted thousands of people to flee, a United Nations official has warned.

More than 4,000 people have been driven from their homes in the last three weeks, Mark Cutts, head of the UN's Office for the Coordination of Humanitarian Affairs, told AFP late Friday. An additional 15,000 people have left since the beginning of the year.

"We have received reports from local organizations saying that there are still many civilians who remain trapped in conflict-affected areas," he said.

"Our biggest concern is for the safety of civilians — including pregnant women, the elderly, small children and people with disabilities. We must ensure that these people are protected."

A 17-year-old ceasefire between the Kachin Independence Army (KIA) and government forces broke down in 2011. There have been frequent clashes since then, but in early April local civil society groups reported an escalation in the conflict.

"The army is sending more troops from the lower part of Myanmar and that's why the fighting will be more intense," he said, adding that the clashes were "the worst conflict" since Kachin soldiers started fighting the government in the early 1960s.

The US Embassy in Yangon said it was "deeply concerned" by the fighting. In a statement posted to Twitter, it urged the government and military to "protect civilian populations and allow humanitarian assistance," to affected towns.

Myanmar's de facto leader, Aung San Suu Kyi, said making peace with the country's ethnic minorities was her main priority when she took office in 2016, but progress has been slow.

Several ethnic armed groups are demanding autonomy and power in the Buddhist-majority country, where most political and military positions are occupied by Myanmar citizens.

Besides unrest in Kachin, the country has also seen violence in western Rakhine province, from which almost 700,000 Rohingya Muslims have fled.

Myanmar – A year of democracy

A year ago, Aung San Suu Kyi's party took over the reins of the country as Myanmar's first elected government in half a century. Things haven't turned for the better for everyone since then. Verena Hölzl reports. (30.03.2017)

People wait hours for food, elephants invade the camp and a wedding is celebrated. These are stories from the Rohingya camp in Kutupalong in Bangladesh. DW Akademie trains Rohingya refugees to work as camp reporters. (29.03.2018)