French war against Islamic State relies on US cooperation

Presidents Francois Hollande and Barack Obama have vowed to ramp up their joint efforts to destroy Islamic State. France's strategy after the Paris attacks requires broad US cooperation and a role for Russia. 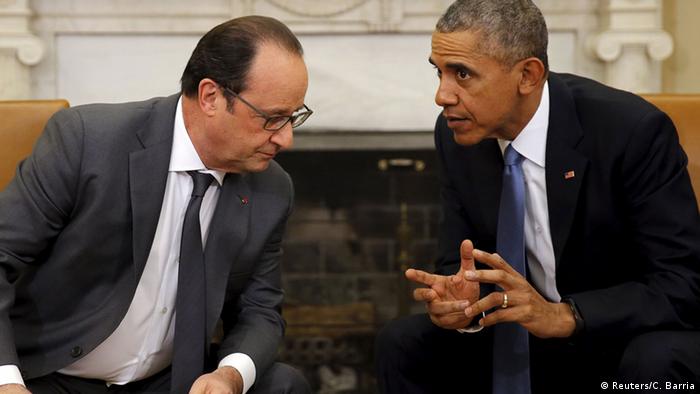 US President Barack Obama on Tuesday vowed "total solidarity" with France in the fight against Islamic State, amid growing pressure from Paris to cooperate with Russia in Syria.

"We're here today to declare that the US and France stand united in total solidarity to deliver justice to these terrorists," Obama said during a joint press conference with the French president.

"This barbarous terrorist group ISIL or Daesh and its murderous ideology poses a serious threat to all of us," Obama continued. "It cannot be tolerated. It must be destroyed, and we must do it together."

Washington has been providing intelligence to help France direct its airstrikes in Syria and will increase that cooperation, the US president said.

President Hollande ruled out putting boots on the ground, but said France is supporting local fighters in the Iraqi cities of Ramadi and Mosul. The aircraft carrier Charles de Gaulle has also been dispatched to the eastern Mediterranean to step up airstrikes.

Michael Shurkin, a defense expert at the RAND Corporation told DW France's response to the attacks in Paris will depend on the amount of cooperation the United States is willing to provide.

"If Francois Hollande wants to turn up the dial or the volume - however much he wants to do it, either a little bit or a lot - he almost certainly has to do that with the willing cooperation of the United States," Shurkin said. 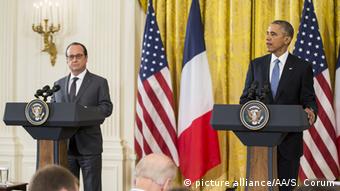 Though France and the US share the overriding strategic goal of destroying Islamic State, Washington has been slow to grasp the gravity of the situation in Europe, said Simond de Galbert, a French diplomat who served in the Ministry of Foreign Affairs.

"The US is underappreciating the structural impact that the crisis is having on Europe," De Galbert, a visiting fellow at the Center for Strategic and International Studies, told DW. "The refugee crisis and terrorism are all drivers for more populism and such trends cannot be a positive thing for the United States in terms of strengthening the transatlantic relationship."

President Barack Obama has resisted pressure to change course in Syria, saying "the strategy that we are putting forward is the strategy that ultimately is going to work." The White House has vowed to intensify its current efforts, which include airstrikes, some 50 special forces on the ground in Syria and support for local Kurdish and rebel groups.

France's military response to the Paris attacks probably won't go beyond what the US is doing in Syria, according to Shurkin. The French military is effective, but limited in its scope and capabilities, he said. Paris needs US help airlifting forces, refueling aircraft and providing some intelligence.

"If we're talking about France sending an entire regiment or brigade to Syria, it certainly could not do that without US help," Shurkin said. "I don't think Obama would agree to it, but I don't think Francois Hollande is going to be asking for that." 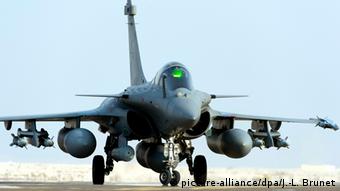 President Hollande has called for the formation of a broad, single coalition to combat Islamic State. During a phone call last week, he and Russian President Vladimir Putin agreed to "closer contact and coordination between the military and security service agencies of the two countries in actions against terrorist groups...in Syria," according to the Kremlin.

Putin has ordered the Russian naval and air forces "to establish direct contact with the French and work with them as allies," according to Agence-France Presse.

President Obama has been more publicly skeptical of Moscow's role. On Tuesday, Obama said "Russia's the outlier" in the fight against Islamic State. The US president also supported the right of NATO ally Turkey to defend its airspace, after Ankara shot down a Russian aircraft that allegedly strayed into its territory. Obama called for deescalation after the incident.

Whatever their differences may be, Paris views Washington as its most important ally in the fight against Islamic State, de Gilbert said, and France will be asking its other partners to do more as well.

"It's one thing to ask the United States to do more, but keeping in mind that the US is already the country most militarily involved against Islamic State," de Gilbert said. "But then it's another to send the message to Europeans that they need to step up."

Ex-French ambassador to US: Paris does not want boots on the ground in Syria

In today's meeting with President Obama, French President Hollande will call for improved military and intelligence cooperation, Paris' former US ambassador tells DW. Deploying troops to Syria is not on France's agenda. (24.11.2015)