Investigators have detained five teenagers in connection with the vandalizing of Jewish graves in a cemetery in eastern France. The incident, amid rising anti-Semiticism in France, followed the attacks in Copenhagen. 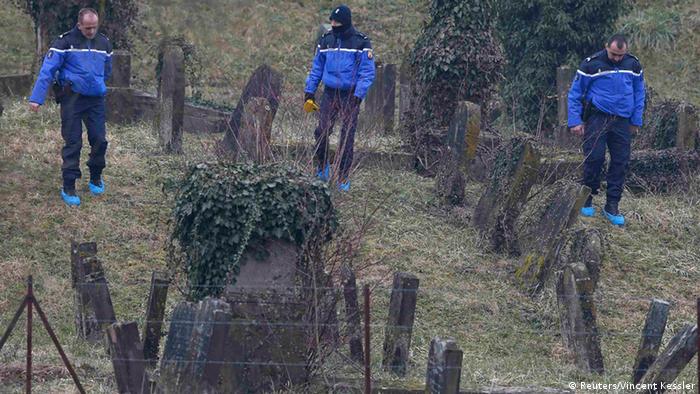 The five suspects detained by French police on Monday are aged between 15 and 17, Philippe Varnier, the prosecutor of the eastern Bas-Rhin region, told a news conference.

All five are from the region of Sarre-Union in Alsace, where some 250 Jewish tombs were defaced and damaged on Thursday.

Vannier said the youngest of the teenagers had gone to police after being shocked at the worldwide reaction to the incident, in which tombs were uprooted or turned around, vaults opened and a monument to the Holocaust vandalized.

"Apparently, he was very very affected by the scale of the reaction to this affair, including the statements from the hightest state authorities," Vannier told reporters, adding that the boy had denied any anti-Semitic motive.

"We don't know the motives of these adolescents who don't have past criminal records and we don't know of any ideological convictions that could explain their behaviour," he said.

The desecration, which was discovered on Sunday just hours after a Danish Jew guarding a synagogue in Copenhagen was shot to death by a 22-year-old gunman, was vehemently condemned by the French government.

The incident comes amid an increase in anti-Semitic acts in France, which has Europe's largest Jewish population.

A study released in January showed a doubling in such acts last year compared with 2013, while violent acts increased by 130 percent.

Four Jews were shot dead at a kosher supermarket in Paris in early January by one of three Islamist gunmen who went on a killing spree in the French capital.

The rise in attacks on Jews in Europe, and the Copenhagen killing in particular, prompted a call by Israeli Prime Minister Benjamin Netanyahu on Sunday for Jews to come to Israel for safety.

In response, French President Francois Hollande insisted that Jews were an integral part of Europe.

"I will not just let what was said in Israel pass, leading people to believe that Jews no longer have a place in Europe and in France in particular," he said. "France is determined to fight relentlessly against anti-Semitism and those who want to compromise the values of the Republic."

The cemetery in the Alsace region has been desecrated twice previously, in 1988 and in 2001.