Sporting goods chain Decathlon has canceled plans to sell a sports version of the hijab Muslim headscarf in France after a public outcry. Supporters of the hijab say it allows women to be an active part of society. 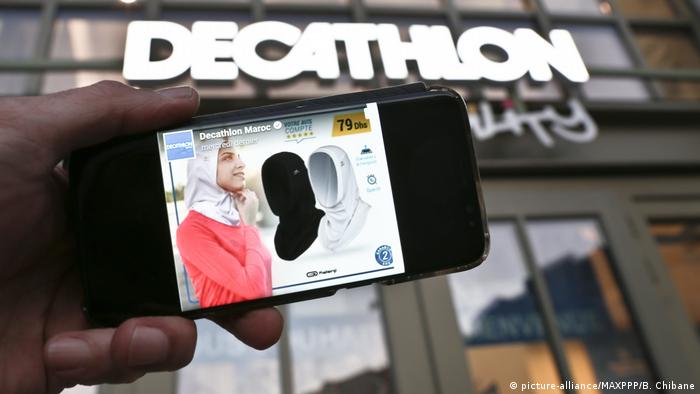 French sporting goods chain Decathlon has canceled plans to sell a runner's hijab in France following a public outcry and opposition from some politicians who called for a boycott.

Decathlon official Xavier Rivoire told the RTL broadcaster on Tuesday that the Muslim headscarf designed for runners would not be sold at its stores in France for the time being.

Decathlon had initially said it would sell the sports hijab to meet "a requirement of certain runners, and we are therefore responding to this sporting requirement."

Several French politicians criticized Decathlon for its plans to sell the product in France, including Health Minister Agnes Buzyn.

Such a product is "not forbidden by law," she said on RTL, but "it is a vision of women that I do not share. I would have preferred that a French brand not promote the veil."

Aurore Berge, a spokeswoman for President Emmanuel Macron's Republic on the Move (LREM) party, said that "sport emancipates, it does not suppress."

She criticized "those who tolerate women in a public space only when they hide themselves."

France banned the hijab, which covers the hair but leaves the face open, from schools and government offices in 2014. However, women wearing headscarves on street are still common.

Proponents of the sports hijab say it encourages Muslim women to be active and empowers them.

Angelique Thibault, who created Decathlon's Kalenji running brand, said she was "motivated by the desire that every woman should be able to run in every neighborhood, every city, every country ... regardless of her culture."

Read more: Why do women hide their hair?

Three years ago, after the commercial release of the so-called burkini, some French mayors banned the full-body swimsuit saying it symbolized female enslavement.

American Olympic fencer Ibtihaj Muhammad has been honored with a hijab-wearing Barbie doll. It marks another move by Western companies to tap into the Muslim market. (14.11.2017)