French authorities have arrested five people suspected of planning an attack on this weekend's G7 summit in Biarritz. The meeting of world leaders has proved to be a magnet for left-wing protest movements. 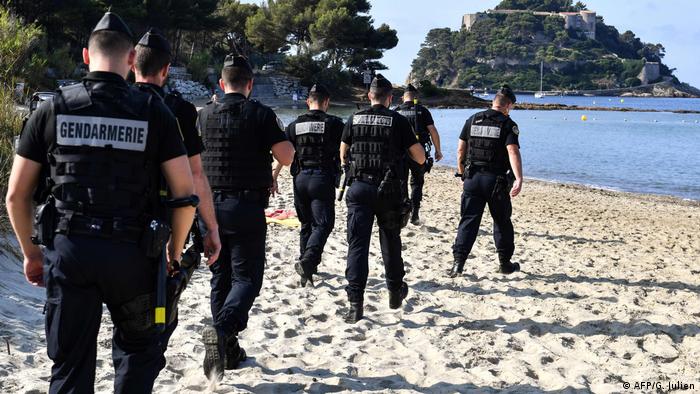 Five people have been detained in France on suspicion of planning an attack on this weekend's G7 summit, authorities announced on Tuesday.

The suspects, who included "black bloc" anti-capitalists, were arrested on Monday for posting messages online encouraging attacks on a hotel accommodating police gendarmes during the August 24-26 talks. Four were released a day later.

French President Emmanuel Macron, who will host global leaders such as German Chancellor Angela Merkel, British Prime Minister Boris Johnson and US President Donald Trump for the three-day meeting, warned that security measures in Biarritz would be "unprecedented."

The glitzy French resort will be transformed into a security fortress for the weekend. Trains will not serve the stations in Biarritz or the neighboring resort towns, and its airport will be closed to scheduled flights.

At least 13,000 security forces have reportedly been deployed to protect the leaders and their delegations.

"The aim is to have maximum security with a minimum of disruption. We will not tolerate any unrest. If it happens, we will respond," Interior Minister Christophe Castaner said on Tuesday.

Despite the security measures, left-wing activists plan to hold a rally in nearby Bayonne brandishing presidential portraits of Macron seized from public institutions around the country under the slogan "Take down Macron."

The Hotel du Palais, built for Napoleon III's Empress Eugenie, whose enthusiasm for Biarritz turned it into a major resort, has undergone a 60-million-euro ($67-million) facelift ahead of hosting the world leaders.

The G7 meeting has proved to be a magnet for left-wing protest movements, attracting anti-capitalists, environmental activists, pro-refugee groups and many more.

Opinion: Time to scrap the G7

The messy quarrel over the G7 communique serves nobody. So why not scrap these summits altogether? After all, the four-decade-old event is an anachronistic format anyway, says Felix Steiner. (11.06.2018)

As is routine whenever the leaders of the Group of Seven or G7 countries gather, Quebec City is bracing for protests. But its inhabitants are taking the high-level meeting and the protests in stride. (08.06.2018)