French authorities besieging a man suspected of killing seven people in the Toulouse area since last week have denied claims by two French television channels that the 23-year-old suspect had been arrested. 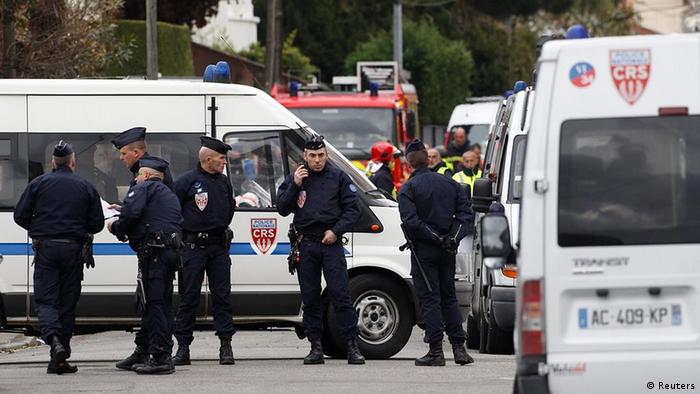 A spokesman for Interior Minister Claude Gueant said the minister "denies the arrest of the main suspect." That coincided with an AFP news agency report that police had found explosives in the car of the suspect's brother.

The stations BFM-TV and i-Tele had claimed mid-afternoon local time that police had arrested the main suspect, identified as Mohamed Mareh, at the four-storey building which they had cordoned off before dawn on Wednesday,

The drama had intensified on Monday when a gunman on a motor scooter shot dead three Jewish children and a teacher outside the Ozar Hatorah Jewish school in Toulouse. The previous week, a gunman, also on a motorbike, had shot dead three French paratroopers of North African origin at Montauban, 50 kilometers away.

The lawyer who had defended the suspect starting in 2004 on petty criminal charges, Christian Etelin said Merah had initially been "courteous" but went to Afghanistan two years ago and became radicalized.

Merah last appeared in court in February for driving without a license.

Suspect was under observation

Earlier on Wednesday Gueant said Merah, a French citizen of Algerian origin, had been under observation by French intelligence for "several years" because of visits he made to Afghanistan and Pakistan.

"He claims to be a mujahedeen and to belong to al Qaeda," Gueant told reporters. "He wanted revenge for the Palestinian children and he also wanted to take revenge on the French army because of its foreign interventions."

Gueant said the man's brother was taken into custody earlier Wednesday at a different location.

At one stage during the stand-off, the suspect is said to have cut off talks with negotiators. He was believed to be armed with numerous guns, including a machine gun. Reporters heard gunfire several times.

Gueant said the man had shot through the door when police arrived. At least two officers were lightly injured in the exchanges of gunfire.

The police said his mother had been brought to the scene to talk to him.

President Nicolas Sarkozy said in a television address on Wednesday that acts of terrorism would not manage to divide the country.

"Terrorism will not succeed in fracturing our national community," he said. "I say to the entire nation that we must be united."

Meanwhile, in Jerusalem hundreds of mourners attended the funeral for the victims of the shooting at the Toulouse school on Wednesday morning. A plane from Paris arrived in Tel Aviv earlier in the day carrying their bodies as well as French Foreign Minister Alain Juppe and around 50 friends and relatives of the four victims. 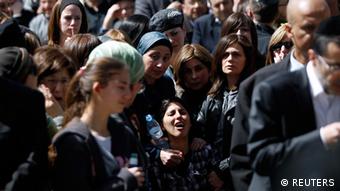 Grieving at the Givat Shaul cemetery on the outskirts of Jerusalem

Jonathan Sandler, a 30-year-old Frenchman, was killed along with his two sons Arieh, 5, and Gabriel, 4, and 7-year-old Myriam Monsonego. The children all held dual French-Israeli citizenship.

Investigators searched the Internet for possible footage of the attack after witnesses claimed the perpetrator was carrying a video camera as he carried out the school attack.

They were able to track down the suspect by identifying his brother's Internet address, police sources told the AFP news agency. The brother had apparently placed an ad on the Internet to sell the scooter used by the perpetrator in the first attack on a paratrooper in a town outside of Toulouse earlier this month.

Some suggested there was a racist element to the attack, since two of the dead soldiers were French citizens of North African origin and the other came from the French West Indies.