Thousands of security forces have been deployed around Paris to confront citizens protesting plans to introduce coronavirus passes. The protests are the third in as many weeks. 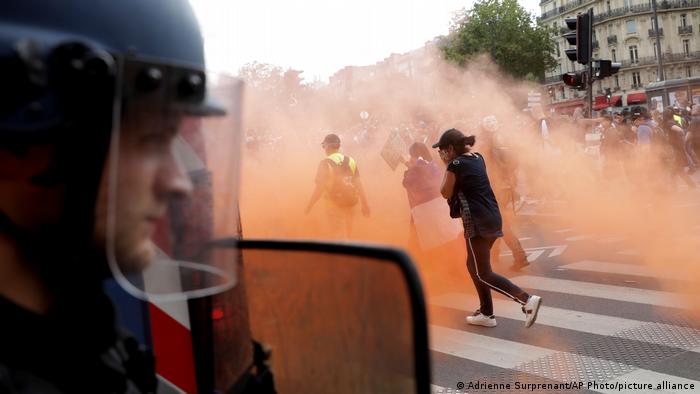 More than 3,000 police and security personnel were deployed around the French capital Paris on Saturday as thousands of protesters angered by the government's planned introduction of health passes descended on the city.

Nationwide, around 204,000 people took part in protests across the country, according to the Interior Ministry. The numbers were up from the figures logged during protests last weekend.

In Paris, police used teargas and force when confronting protesters at four different rallies across the city.

They moved to keep demonstrators from entering the capital's famous Champs-Elysee avenue, which was ransacked in violent "yellow vest" protests back in 2018.

A police spokesperson reported that three officers had been injured by protesters during the course of the day.

What are the French protesting about?

New health passes will be required for citizens to travel and enter businesses, such as cafes, restaurants or hairdressers, as well as on trains or at fairs, beginning August 9 — pending Constitutional Council approval. Moreover, vaccination will become mandatory for certain professions.

Protests, taking place for the third Saturday in a row, are being staged not only in Paris, but in more than 100 cities around the country, including Montpellier, Bordeaux, Marseille and Nice. An interior ministry official said over 200,000 people had demonstrated across France. 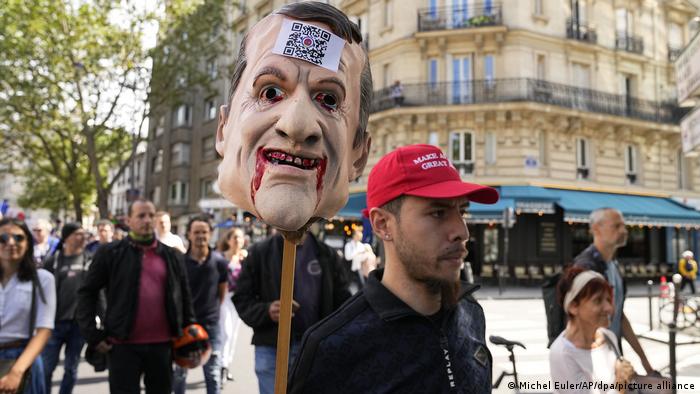 As in other Western countries, demonstrations in France are populated by various stripes of anti-government protesters

Who is protesting in France?

Opinion polls show that a majority of people in France favor the idea of a health pass, but some staunchly reject the measure, taking to the streets to voice anger at the plan.

"When I see the parallels to the 4 million people who went to get vaccinated after the president's speech, then you see that the demonstrators are not in the majority," he told the newspaper Le Parisien.

Previous protests have seen far-right marchers alongside "yellow vest" adherents and others who claim the pass will limit their freedom. One fixture at such rallies, Francois Asselineau, the leader of the fringe, anti-EU Popular Republican Union party, will not attend the protests as he has contracted COVID-19.

Is everyone against the idea of health passes?

Other citizens have taken a more pragmatic approach, deciding to get vaccinated to avoid being shut out of social life during France's August vacation season.

Federal and regional governments across the country have set up a number of places for citizens to get the jab, including at beaches in popular vacation destinations.

Infections, driven by the newer and more contagious delta variant, are on the rise in France, with 24,000 new infections reported on Friday.

According to a new study conducted for the Ministry of Social Affairs and Health, unvaccinated individuals now make up nearly 85% of all new hospital admissions — including intensive care — and 78% of all COVID-19 related deaths.

Nearly 112,000 people have died of the coronavirus in France since the pandemic began last year. More than 52% of the French population has been vaccinated.