France's Socialist government will face a no-confidence vote on Thursday, as protestors plan large demonstrations against labor reform. The government is likely to survive despite rebels within party ranks. 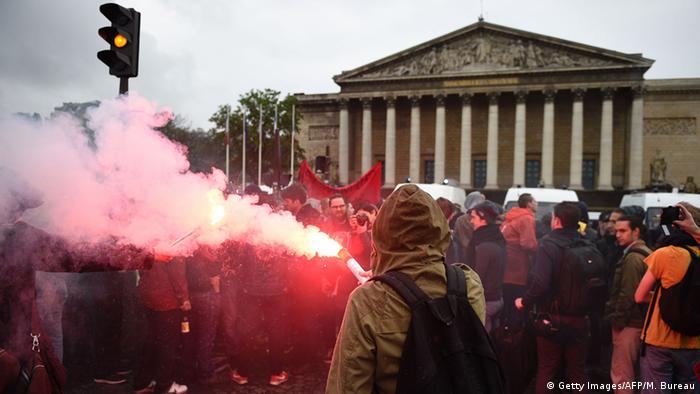 France's Socialist government will face a no-confidence vote on Thursday after it exercised a rarely used legal maneuver to bypass parliament and advance a controversial labor reform that has triggered two months of massive protests.

Police fired tear gas and rubber pellets at protestors outside the National Assembly in Paris on Tuesday evening, as unions and student groups called for large-scale demonstrations against the government on Thursday.

Protestors want the government to drop the reform bill, which would create more flexible working hours and relax stringent labor rules. The government says existing labor rules have kept unemployment stubbornly high, but under pressure it has watered down portions of the bill.

The decision to avoid parliament was announced by Prime Minister Manuel Valls at an extraordinary cabinet meeting Tuesday, after it became clear the government would not have enough votes to pass the reform. The Socialists have faced resistance from rebels within their own ranks.

Two conservative opposition parties filed the no-confidence motion, but Valls' government is likely to overcome a vote in the 575-seat parliament.

The two opposition parties have only 226 of the 288 votes needed to bring down the government. The Socialist rebels, meanwhile, are unlikely to topple their own government.

The reform would still need to pass the Senate.

'Insult to the people of this country'

Still, pressure is likely to mount on President Francois Hollande, whose approval ratings have dropped to 13 percent. Slamming through the labor reform will also likely hurt support for the Socialists among leftists ahead of elections scheduled for next April.

The street protests that started in early March have given birth to a youth movement called "Nuit Debout" ("Up all Night"), which shows no signs of weakening. The movement, which takes up city squares at night to demand change on multiple fronts, has gathered a number of causes under its umbrella.

"Nuit Debout" organizers said Tuesday that the government decree was "an insult to the people of this country." The FIDL youth organization said in a statement the government's move signals that is "refuses the democratic debate on this law."