Freiburg continued their remarkable season with a 3-1 win over Hamburg, to book their ticket to Berlin. The prematch talk was of Nico Schlotterbeck's move to Borussia Dortmund but this was another triumph of teamwork. 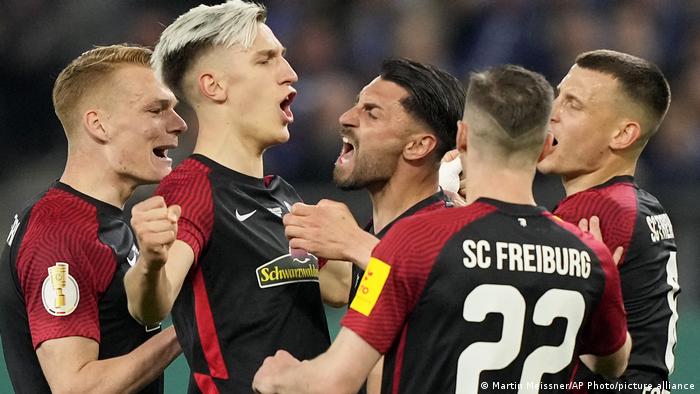 The Volksparkstadion in Hamburg has witnessed two significant firsts in recent years. In 2018, Hamburg lost their Bundesliga status for the first time and the famous clock that counted their time in the top flight stopped ticking. On Wednesday, close to 60,000 home fans were again on the wrong side of history, as Freiburg raced in to a first German Cup final in their 118-year existence.

As is often the way as German seasons enter the home straight, the big two have been preparing for next season by targeting transfers from fellow Bundesliga sides. Widespread reports on the day of the match in Germany suggest Borussia Dortmund have agreed a deal with Freiburg centerback Nico Schlotterbeck for next season.

Any thoughts that this, or a partizan home crowd denied a big occasion for so long, would put the Black Forest club off their stride were quickly dispelled when veteran striker Nils Petersen looped home an 11th-minute header.

A deflected long-range strike from Nicolas Höfler, following some excellent team high pressing, eight minutes later made things comfortable. Vincenzo Grifo tucked away a penalty before the break to make things even more secure after Schlotterbeck was kicked in the neck following a foray forward. A late Robert Glatzel consolation was all the second tier hosts could muster in return.

"This is indescribable, we are making history," said an emotional Höfler after the game.

The three first half scorers have racked up over 650 combined appearances for the club and they, like long-serving head coach Christian Streich, have seen exciting young talents come and go before. Luca Waldschmidt and Robin Koch last year, Caglar Söyüncü, Roman Bürki and Matthias Ginter in the six years before that. The club's ethos, and Streich's character, remain. 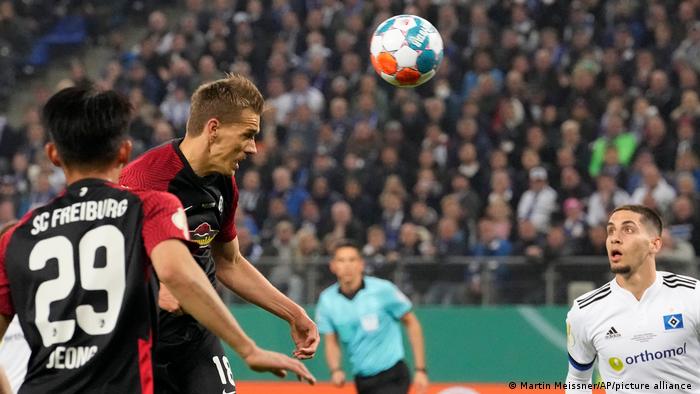 Nils Petersen's early header gave Freiburg the lead, and they never looked like relinquishing it

"I can't even tell you what was going through my mind," said the head coach post match to ARD. "It sounds strange, but some of my boys have already been to the Youth Cup finals, after which we always watched the professionals. I have no worries that they will be too nervous. And if we don't win, at least we were in Berlin."

The news of Schlotterbeck's seemingly imminent €25 million ($27 million) move to BVB was made so easy to handle because of how Freiburg have positioned themselves. The Germany international defender has undoubtedly been one of their best performers of a season that also sees them in Champions League contention in the Bundesliga. But he is, for now, just one part of a club built on sustainable transfer policy, longterm planning and teamwork.

They will meet another side built more recently in a similar image, Union Berlin, or a club with whom the contrast couldn't be much sharper, RB Leipzig in the German capital on May 21 where the cup will definitely see a first time winner. It looks like it'll be Schlotterbeck's last game. But it won't be the end of Freiburg.