Frankfurt′s future as a financial hub | Business | Economy and finance news from a German perspective | DW | 11.05.2016

Frankfurt's future as a financial hub

The planned fusion of the Frankfurt and London stock exchanges has sparked concern within the metropolis on the Main. Will Frankfurt lose its status as an important trading center? Stefan Wolff reports. 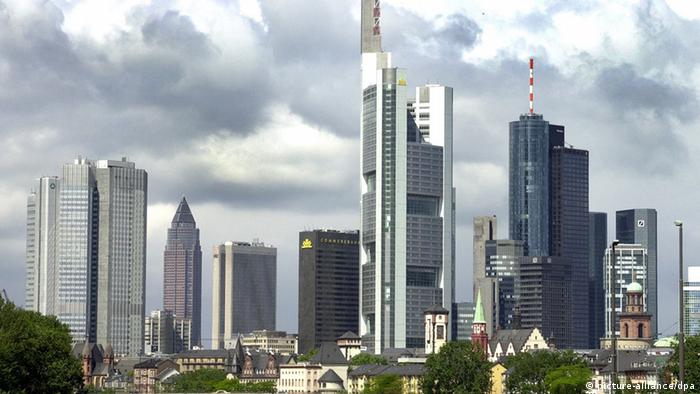 After 46 years, it was all over. Fidel Helmer first stepped foot onto the Frankfurt trading floor in March 1970, and, this March, he arrived to clear out his office.

For decades Helmer was responsible for the portfolio of the bank Hauck & Aufhäuser. Lately, he has acted as a consultant, providing advice and explanations as a frequent guest of media outlets.

The Frankfurt Stock Exchange (FWB) insisted, however, that Hemler's employers continue to pay for him the 15,000 euro ($17,110) annual fee otherwise asked of floor traders. As a result, his office is now empty, like so many other offices of old-school traders at the stock exchange. The sales figures on the trading floor are thin. Virtually all of the trading activity unfolds on the Xetra computer system.

A drop in rank

Frankfurt is under threat of losing connection with its international competition. This is evidenced by the recently published "Global Financial Centres Index," a survey conducted among more than 2,500 members of the global financial community. Its results show London standing out front as the world's preeminent financial hub, with New York following close behind. 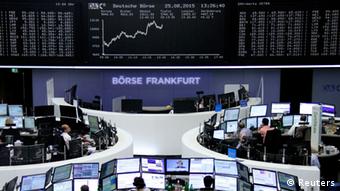 A look into the Frankfurt Stock Exchange's trading floor

Frankfurt has fallen four spots since last year's rankings. It is now placed behind not just Luxemburg, Dubai and Shanghai, but Boston and Toronto as well. There is little glory in finishing in 18th place. But Frankfurters aren't letting the survey spoil their mood.

Rightly so. The region still has other things going in its favor. Frankfurt is the European continent's bank magnet. 161 foreign banks keep an office in the city, alongside 40 German banks. The fact that over 400 institutes no longer bustle around the city like a few years back is above all an effect of the financial crisis, as well as a result of the wave of consolidations that has since taken place. Commerzbank took over Dresdner Bank. Bavaria's Hypothekenbank merged with Vereinsbank, before HypoVereinsbank merged with the Italian Unicredit bank. The carousel continues to spin.

The financial sector is searching for its business model, and not only in Frankfurt. This has meant less investment banking and more advising, a sector which Frankfurt has long led. Many mergers and business acquisitions, big and small, were initiated in Frankfurt, and a long list of German businesses has grown fit for the stock market here.

Such services, however, are not only coming from banks, but increasingly also from businesses that resemble them - the so-called FinTechs - that are now sprouting like mushrooms. Hoping to grab hold of this start-up activity, financial systems developer Deutsche Börse has opened a "FinTech hub" in Frankfurt. "Doing so, we are contributing to the creation and development of a FinTech scene in the financial center of Frankfurt," said Karsten Kengeter, chairman of Deutsche Börse. "Frankfurt should become Germany's leading FinTech center."

No lack of institutions

But it will be a long way to reach that point. Zurich has also announced a similar intention to develop itself into a FinTech Mecca. And London already has - last year The City collected 2 billion euros ($2.28 billion) of venture capital for FinTechs. As for Frankfurt, four start-ups have just set up offices at the FinTech hub. 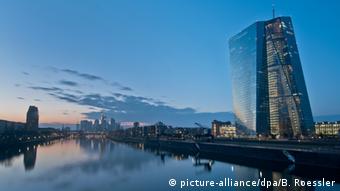 The European Central Bank's new headquarters in Frankfurt, along the Main River

All in all, Frankfurt won't be disappearing from the financial scene after its stock exchange merges with its counterpart in London. Commerzbank will continue to operate one of Europe's biggest trading rooms right by the city's main station. Germany's Bundesbank and the European Central Bank will still be seated in Frankfurt as well, in addition to a number of European oversight institutions and, of course, the Frankfurt Stock Exchange itself.

All told, the combined market value of around 16 billion euros makes Frankfurt the fourth largest trading center worldwide, one place before London. And that value is likely only to shoot up as a result of the planned fusion with London.

Would a British exit from the EU be good or bad for Frankfurt as a financial center? And what about its merger partner, the London stock exchange? Two surveys come to different conclusions. (07.04.2016)