The world's largest book fair has opened in Germany with the spotlight on the growing turf war between traditional booksellers and global tech giants. Hundreds of thousands of visitors are expected to attend the fair. 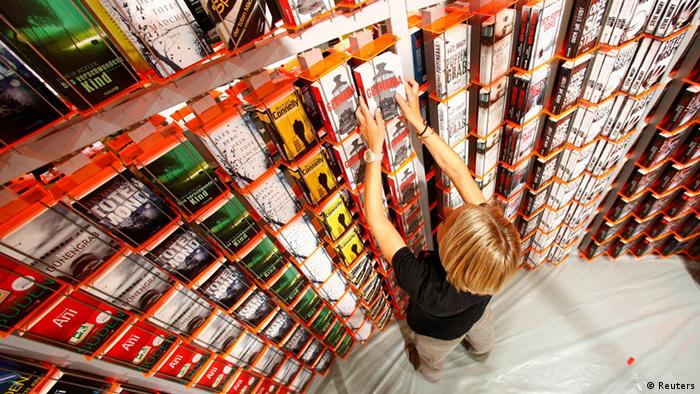 Between Wednesday and Sunday, the Frankfurt Book Fair will feature 7,300 exhibitors from 100 countries, put on around 3,000 events and play host to an estimated 280,000 visitors. The fair showcases international publishing and its crossover to film, video games and merchandising. It was officially inaugurated on Tuesday before doors open on Wednesday.

Many of the publishers, authors and sellers attending will have their own ideas on some of the main themes of the fair: the challenges of online trading, the future of the traditional bookstore amid falling sales, and the opportunities and challenges presented by Internet companies with digital publishing in their sights.

Organizers have warned against the domination of tech giants, saying traditional publishers are feeling the need to be "big," with the merger this year of Penguin Random House as an example.

They also point to need for diversity in what people read and how they read it, and the increasing number of start-ups fighting back with innovations in the search for a viable business model.

"The dividing line is no longer between old and new, print and e-books, analogue and digital," said Juergen Boos, the director of the Frankfurt Book Fair.

"Instead it runs between those who have a passion for content and who want to provide access to it, and those who don't really care what they're selling."

Boos warned that companies like Amazon, Apple and Google were "logistics magicians but are not publishers." He said technical functions such as payment systems should be better designed, as they can influence how and what customers read and their access to content.

"Technical standards are tools. They must be designed to serve people and their needs, not the other way around."

Fair spokeswoman Katja Böhne said the growth of startups in digital publishing mirrored the switch to smartphones in mobile communications. While digital books were the beginning, Böhne said that it was now also possible to self-publish, create interactive reading and 3D educational products, as well as new ways of shopping on the Internet.

"The possibilities of buying books in the classic ways of bookselling are becoming constantly smaller. Accordingly, new solutions for the distribution of books on the Internet are being worked on everywhere," Böhne said.

The book, written by E L James, is the first part of a trilogy that has been translated into 50 languages and sold over 70 million copies globally.

"Everyone wants a certain bestseller, they all want the next Harry Potter, or the next Fifty Shades of Grey or Dan Brown...everyone's lusting after it," Boos said. Successes like these also posed questions on the diversity of what people read, he said.

There is also some encouragement in German sales figures, according to Gottfried Honnefelder, president of the German Publishers and Booksellers Association, with bookstores losing less of their share of the market to the Internet. Honnefelder says sales from bookstores, e-commerce and department stores grew by 0.8 percent until the end of September, compared to the previous year.

Bookstore sales alone were 0.9 percent, Honnefelder said, with the small growth pointing towards a "new self-confidence" in Germany.

The fair features Brazil as special guest for 2013, and the South American nation is represented by 90 writers and a government program worth 900,000 euros ($1.2 million) for the translation of Brazilian works.