When she enters the Elysee Palace on Sunday, Brigitte Macron will take on the role of France's "first lady," a position she hopes to redefine. Over the years, many have shaped the role to suit their personalities.

From electrifying the Elysee Palace and organizing Christmas parties in the late 19th century to shaping political campaigns today, the women linked to France's presidents have long influenced the country's political affairs. 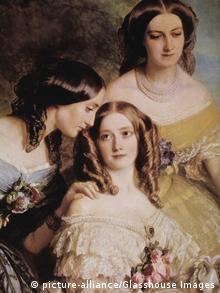 Eugenie de Montijo (center) would have been the first 'first lady' - but her husband, Louis-Napoleon Bonaparte, organized a 1851 coup and declared himself emperor

While some first ladies preferred to stay out of the spotlight and simply be the supportive wife, many forged their own path.

In the late 19th century, Cecile Carnot organized grand balls at the Elysee Palace and started a Christmas tradition that continues to this day, inviting hundreds of disadvantaged children to celebrate the holiday at the presidential home.

She reportedly tried to get the president to ban the miniskirt, and famously refused to welcome divorced or adulterous people to the Elysee Palace, including (divorced) French bombshell Brigitte Bardot.

Her efforts were not in vain: Charles de Gaulle is said to have been the only modern-day president not to have had at least one mistress.

Danielle Mitterrand, who in her youth went underground with the French Resistance during World War II, was a lifelong supporter of socialist causes, from the Zapatistas in Mexico and the Marxist-Leninist government in Cuba to ethnic minorities such as the Kurds and Tibetans. She kept up her work as first lady in the 1980s and 1990s.

In 2005, Mitterrand voted "no" in the 2005 French referendum on the European Constitution, telling German newsmagazine "Spiegel" that she denounced "the power of the economy over people."

"Money is the guru; money decides everything," she told RTL radio shortly before her death in 2011. "That's why we are working to get out of this system." 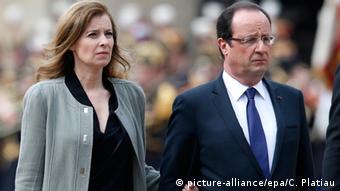 Trierweiler (left) and Hollande split up two years into his presidency

In recent years, French first ladies have grabbed the spotlight for matters of the heart. Former President Francois Sarkozy and his second wife Cecilia divorced less than six months after he assumed office in 2007. A few months later, he married former top model and singer Carla Bruni.

Outgoing President Francois Hollande celebrated his 2012 win with his partner, journalist Valerie Trierweiler. But a couple years later, his affair with actress Julie Gayet was exposed by celebrity magazine "Closer."

A tell-all memoir by Trierweiler, which revealed intimate details and depicted the Socialist leader as someone who doesn't like the poor, didn't help his image.

And now, Brigitte Macron is set to enter the Elysee Palace. The 64-year-old has helped shape the president-elect's political career, and Emmanuel Macron has said he wants to formalize the role of first lady.

It remains to be seen how the former drama teacher and grandmother of seven will shape the role for herself.

For a look at legendary first ladies around the world, click through the gallery below.

Around the world, leaders' spouses are guarantors of glamour. But some also stand out for eccentricity or dedication. As Brigitte Macron moves into the Elysee Palace, DW looks at legendary first ladies - old and new. (08.05.2017)

She will be France's next premiere dame. In portraits of Brigitte Macron, journalists focus on the age gap: Emmanuel Macron is 24 years younger than her. But who is this woman really? (08.05.2017)

Francois Hollande has said he has ended his partnership with journalist Valerie Trierweiler, two weeks after a magazine published details of his amorous liaisons with actress Julie Gayet. (26.01.2014)