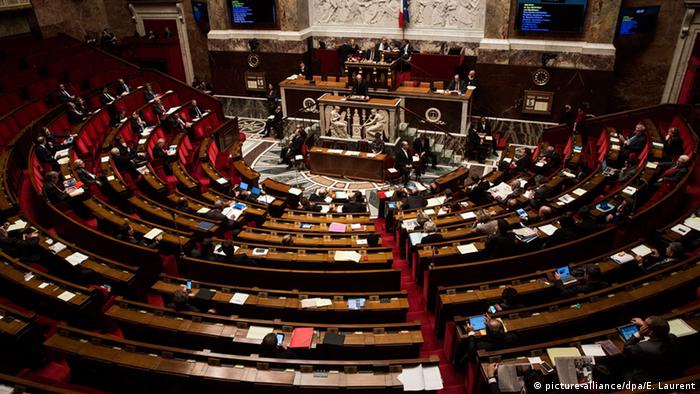 The National Assembly, the French parliament's lower house, voted late on Monday in favor of amending the constitution to include procedures for declaring a state of national emergency.

The French government has said it wants to change the constitution to fight terrorism. Civil libertarians say emergency powers are already being used against non-violent activists. Jacob Resneck reports from Paris.

The first measure of a plan to revise French legislation to grant authorities greater powers to combat terrorism passed 103 in favor to 26 against, with seven abstentions.

French President Francois Hollande's Socialist Party, main opposition The Republicans, led by former president Nicolas Sarkozy, the Radical Party of the Left (PRG) and the centrist Union of Democrats and Independents (UDI) all provided majority support for the change.

Under the proposed amendment, France's parliament would have to approve any state of emergency that lasted more than 12 days, although it could then proceed for a maximum of four months before requiring another approval.

In November, Hollande imposed a state of emergency following a series of attacks in Paris claimed by the so-called "Islamic State" militant group that killed at least 130 people and wounded several hundred.

The current state of emergency is set to expire on February 26, some three months after being activated, although it is likely to be renewed.

Meanwhile, human rights groups have decried proposed measures to amend the constitution, including a controversial change that would allow authorities to strip dual nationals of their French citizenship in cases of terrorism.

The state of emergency imposed by Hollande has also been criticized for giving security forces powers to conduct raids and hold people under house arrest without judicial oversight.

"France has a responsibility to ensure public safety and try to prevent further attacks, but the police have used their new emergency powers in abusive, discriminatory and unjustified ways," said Izza Leghtas, Western Europe researcher at Human Rights Watch. "This abuse has traumatized families and tarnished reputations, leaving targets feeling like second-class citizens."

According to the French Human Rights League, only four legal procedures relating to terrorism have emerged following more than 2,500 police raids carried out during France's current state of emergency.