French presidential candidate Francois Fillon has been put under formal investigation over the misuse of public funds. In January Fillon said he would step down if he was charged. 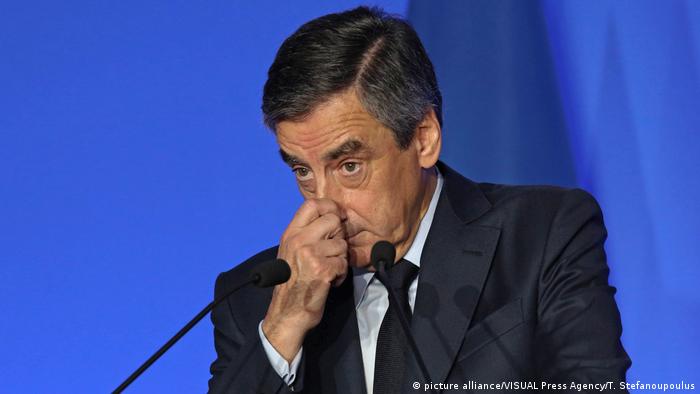 "He was charged this morning," Fillon's lawyer Antonin Levy told reporters. "The hearing was brought forward so that it could take place in a calm manner."

In late January, in an interview aired on national television, Fillon declared that "there is only one thing that would stop me being a candidate: if my honor was called into question, if I was charged."

Under French law, preliminary charges entail investigating magistrates having strong reason to suspect wrongdoing. However, the probe will remain ongoing before magistrates decide whether to send the case to trial.

French weekly "Le Canard Enchaine," which broke the story earlier this year, first announced the investigation on its Twitter page.

While Fillon is by no means the only French lawmaker to have faced legal problems, never before has a presidential candidate from a major party reached such a critical step in a criminal investigation. Despite attempts by rebels from within his party to dislodge him, Fillon has vowed to keep campaigning ahead of the first round of the election on April 23.

The deadline for parties to submit their candidate pick is on Friday.

The former French Prime Minister has been accused of hiring his wife and two children in publicly-funded jobs that they allegedly never performed.

Fillon's wife Penelope was paid some 830,000 euros ($900,000) over 15 years while employed as his and his replacement's assistant in Parliament. Authorities have been investigating whether Penelope Fillon provided services for the salary she received.

"Le Parisien" newspaper also reported fresh allegations on Tuesday that two of his children turned over a large part of their parliamentary salaries back to their parents. A lawyer for Fillon's daughter Marie said the money was paid back to reimburse her parents for her wedding.

Fillon has repeatedly pleaded his innocence to the charges, insisting that he has been the victim of a "manhunt" and an attempted "political assassination." He has denied all wrongdoing, saying that his wife worked from his home in the Sarthe region of northern France during his 40-year political career.

Fillon was the clear frontrunner at the beginning of the year but polls now indicate he would be eliminated in the first round. Independent centrist candidate Emmanuel Macron and far-right leader Marine Le Pen have both benefitted from Fillon's legal disarray. According to opinion polls, both are expected to reach the second round, with Macron appearing as the new front-runner.

Ex-French President Nicolas Sarkozy is to be tried over alleged fraudulent financing of his 2012 re-election bid, prosecutors say. Sarkozy has been fighting for months to keep the case out of court. (07.02.2017)