French intelligence has reported a surge in Hezbollah militia fighting alongside Syria's President Assad's army. Meanwhile, the Syrian army said it has seized a key base in the north, once a transit route for rebels. 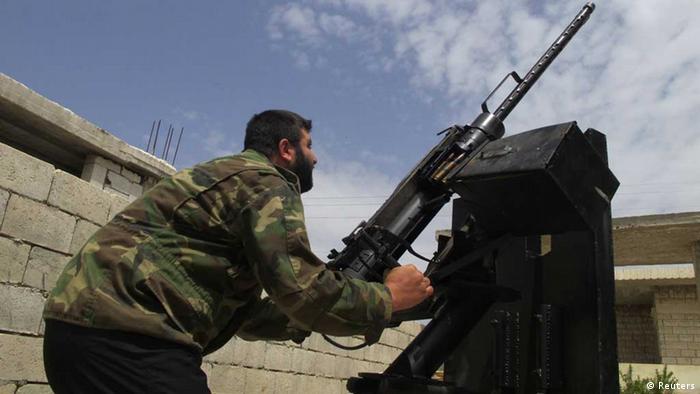 French intelligence services on Wednesday said they believe about 3,000 to 4,000 fighters from Lebanon's Hezbollah militia are fighting alongside President Assad's army in Syria's civil war, double the number previously reported.

"As far as Hezbollah militants present in the battlefield, the figures range from 3,000 to 10,000, our estimates are between 3,000 and 4,000," French Foreign Minister Laurent Fabius told lawmakers Wednesday.

Fabius blamed Iran for pushing Hezbollah into the Syrian conflict and dismissed any suggestion that Tehran could be involved in resolving the Syrian crisis due to its backing of Assad’s government.

"There has been a change on the ground. The involvement of Hezbollah and the fact the Russians have delivered weapons has changed things," he said.

By sending help to Syria's warring factions, Iran, Saudi Arabia and Qatar are struggling to gain influence in the Middle East. The conflict between Sunnis and Shiites has become a proxy war over strategic regional goals. (29.05.2013)

In Geneva, 36 of the 47 members of the UN Human Rights Council voted in favor of a resolution that condemns the intervention of Hezbollah militia fighting on behalf of the Syrian regime.

It also expressed "deep concern" that the involvement of the fighters could "further exacerbate the deteriorating human rights and humanitarian situation."

Meanwhile, the Syrian army said it seized the Dabaa military air base north of Qusair Wednesday, giving pro-Assad forces control of all roads out of the town.

Control of Qusair has been essential for the rebels since it is their main transit route for weapons and fighters from Lebanon.

President Assad’s foreign minister said Wednesday that the embattled leader will run for a third term in 2014 if the people want him to.

"Will President Assad run for a third term or won't he, that will depend on conditions in 2014 and the will of the people," Foreign Minister Walid Muallem told the Beirut-based Arab news channel Mayadeen.

Muallem also said it was not possible for the president to resign before the Geneva 2 peace conference, which organizers hope will convene in June. The United States and Syrian ally Russia are trying to organize the conference in order to find a solution to end the bloodshed in Syria.

"If we reach an agreement in Geneva, and I hope we will, it will be put to a referendum and if the people approve what we agreed upon, I can assure you it will be fully respected," Muallem said.

Western and Arab governments have demanded Assad step down as part of efforts to end the deadly conflict in Syria which activists say has killed at least 80,000 people since it began in March 2011.