EU defense ministers have kicked off a two-day meeting in France. The French would like to see member states overhaul the way they cooperate militarily. But is anyone lining up to salute? 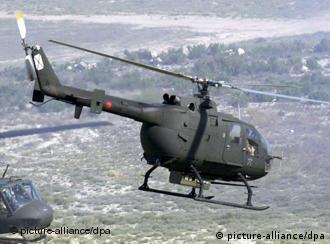 As the defense ministers gathered in the French resort of Deauville, French President Nicolas Sarkozy, who also holds the European Union's revolving presidency, set the tone for what he hopes will be a historical summit.

"How can Europe be a political power that speaks with a strong voice if it isn't in a position to defend itself or take the appropriate measures to enact its defense policies," Sarkozy asked rhetorically.

The main aim of the summit, which runs until Thursday, Oct. 2, is to create a rapid reaction force of 50-60,000 soldiers that could be deployed in the interests of EU security.

"One of the most important things the European Union has to do is to act in real time," Solana said ahead of the summit. "If you have a crisis or a political problem in the world and you don't deal with it rapidly, you waste time, money and the lives, probably, of people."

France would also like to see the creation of a general chief of staff office in Brussels to oversee the force.

But as history shows, EU nations will have to show a lot of political will for member states to come together in the way Paris and Brussels would like. 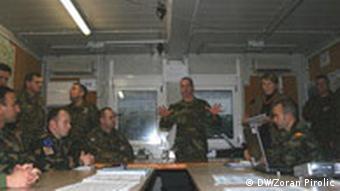 The European Union, like NATO, has no army of its own and instead depends upon member states to provide soldiers and material.

As a result, the bloc encounters difficulties coordinating its resources when trying to intervene militarily. This was illustrated this week, when the EU was forced to ask Russia to provide helicopters for its peacekeeping mission in Chad -- even though Brussels and Moscow were in a clinch over Russian's military incursions into Georgia.

Nonetheless, the Maastricht Treaty stipulates that the bloc have a common defense and security policy, and European military missions have proved successful in recent years.

Most notably, a 1,800-person EUFOR force has successfully taken over responsibility for maintaining peace in Kosovo from its UN predecessor. Backers of reform hope that could help overcome resistance by some member states, particularly Britain, to further integrating the EU's military capabilities. 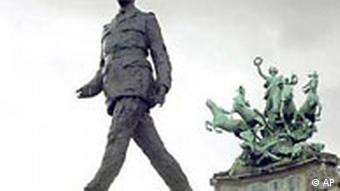 Reform backers stress that a European force would be a supplement to, and not a replacement for, NATO. And NATO may be France's best card for pushing through changes.

France partially withdrew from the trans-Atlantic alliance in 1966 and even today refuses to participate in the full range of NATO activities.

Paris has signaled that that could change, if it gets its way on European defense reforms.

"We will fully participate in NATO, if NATO fully realizes that the EU has a role, too," an unnamed French official told Reuters news agency.

But most likely the summit will produce a compromise, in which both sides of the issue get some, but not all of what they want.

France Calls for More European Effort in Fight for Afghanistan

French Defense Minister Herve Morin added his voice to the chorus of unease and frustration over Europe's commitment to military operations in Afghanistan when he called for more troops and the end of national caveats. (17.09.2008)

Former German Foreign Minister Joschka Fischer has called for a group of EU states to develop a military force capable of reacting to crises around the world. He said the bloc needs a flexible defense policy. (29.07.2008)

The recent war between Russia and Georgia would have "profound consequences" on international relations, according to the Swedish Defense Research Agency. (16.09.2008)

Ukraine: Russia steps up attacks on Mariupol steel plant — as it happened 03.05.2022

Russian forces are attempting to storm the Azovstal steel plant in Mariupol, according to Ukrainian fighters. Meanwhile, Slovakia wants to be exempt from any planned EU embargo on Russian oil. Relive DW's live updates.

Ukraine: Germany expels Russian diplomats with Bucha deaths in focus — as it happened 04.04.2022

The German government has declared 40 Russian diplomats unwelcome and taken temporary control of Gazprom's German subsidiary. This comes as the world digests images of civilian deaths in a Kyiv suburb.