France offers to loan Bayeux Tapestry to the UK

The work depicts the bloody conquest of England by the Normans in 1066. Prime Minister Theresa May thanked France ahead of talks with President Emmanuel Macron over migration controls between the two countries. 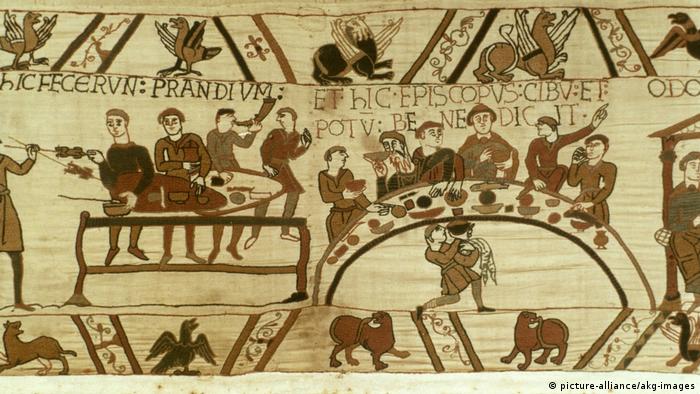 In what can either be interpreted as a generous act of friendship or a symbolic gesture of diplomatic trolling, French President Emmanuel Macron announced on Wednesday that he will offer to loan the UK the famous Bayeux Tapestry for the first time.

The incredible artwork is nearly 70 meters (230 feet) of painstakingly embroidered cloth that depicts the Norman conquest of England, including the Battle of Hastings in 1066, when the Duke of Normandy, William the Conqueror, took control of Anglo-Saxon Britain.

The tapestry (a term disputed by art historians, as the piece is embroidered and not woven) was actually made in England in the 1070s, and was rediscovered in Bayeux, France, in the 1700s.

Despite its depiction of one of the bloodiest chapters in the centuries-long rivalry between Britain and France during a time the UK is trying to leave the European Union, both Prime Minister Theresa May and the British Museum, who will host the tapestry, expressed their gratitude for the loan.

"It is very significant that the Bayeux Tapestry is going to be coming to the UK and that people are going to be able to see this," said May.

Macron's office clarified however that preparations for moving the "extremely valuable cultural treasure" will take until 2020 to complete.

May, Macron set to make deal on refugees

The tapestry announcement came a day before Macron was set for his first official trip to London to meet with Prime Minister May.

According to French news agency AFP, the pair are expected to strike a new deal on "border management" and migration controls. Britain will agree to take in more young refugees and provide funds for economic development in northern France, and both countries will agree to beef up security on their side of the border.

France is also seeking changes to a 2004 agreement that placed the official border between the two countries at Calais, which effectively turned parts of the French port town into a tent city for migrants hoping to make it to the UK.

When the famous Calais "jungle" was cleared 15 months ago, Britain had agreed to grant residency to underage migrants whose relatives were already in Britain, but to date have taken less than half of them in.

In a speech on Tuesday, Macron vowed not to allow another "jungle" to crop up in its place.

Both sides are also set to discuss measures to strengthen their security and counter-terrorism cooperation at a meeting at the Sandhurst military academy near London.

"Today's summit will underline that we remain committed to defending our people and upholding our values as liberal democracies in the face of any threat, whether at home or abroad," May said ahead of the meeting.

Britain has already announced it will send three military helicopters to support a French counter-terrorism mission in Mali.

The two men were each sentenced to 30 months jail after admitting making several flights to England carrying migrants. They were caught earlier this week leaving an aerodrome close to the port town of Calais. (22.07.2017)

Cultural heritage: What makes the cut?

Germany has thousands of historical sites, but which of them are worth preserving? Many locations were witness to human rights violations in the past, whether in the Middle Ages or the Nazi period. (07.09.2013)

US foreign broadcasters get new chiefs under Biden 47m ago

Russian ship resumes work on Nord Stream 2, despite US sanctions 1h ago