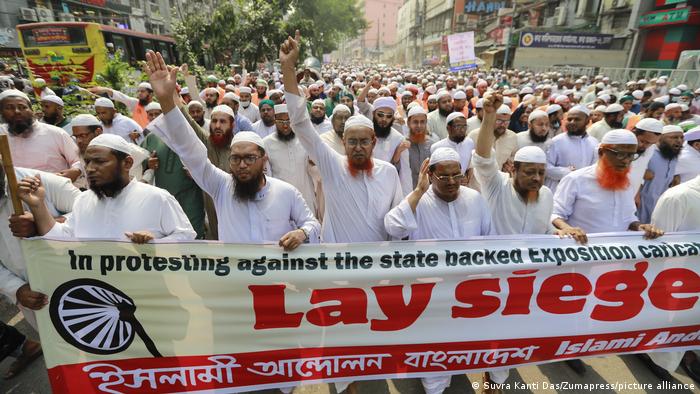 French President Emmanuel Macron has invoked the ire of Muslims worldwide after he pledged to fight "Islamist separatism" and defended the right to publish religious caricatures. The row has led to protests, boycotts and condemnations.

This is what you need to know.

What did Macron do?

Macron delivered a spirited defense of free speech and secular values after a French high school teacher was beheaded for displaying caricatures of the Islamic Prophet Muhammad.

He vigorously defended the controversial cartoons, saying they were protected under the right to free speech. He later added that "we won't renounce the caricatures."

Macron's government is also planning a new bill to combat "Islamist separatism." Macron has said that Islamists have created a parallel culture in France that rejects French values, customs and laws.

He also said that Islam is "a religion that is in crisis all over the world" and that Muslim positions are "hardening."

On Friday, the offending cartoons were projected onto government buildings in France.

What led to Macron's statements?

As part of a class on free speech, history teacher Samuel Paty showed his students some caricatures of Muhammad that had been published by the satirical magazine Charlie Hebdo in 2015.

After community complaints about this lesson, Paty was killed and beheaded outside his school by an 18-year-old Chechen extremist.

The cartoons in question have inspired many Islamist attacks, including the slaughter of 12 people at the Charlie Hebdo offices in 2015.

Depictions of the Islamic Prophet Muhammad are offensive to many Muslims. It is not explicitly forbidden by the Quran, but some accounts forbid Muslims from depicting him.

In France, the Charlie Hebdo cartoons have become icons of a secular tradition that dates back to the Revolution.

How has the Islamic world reacted?

Many Islamic countries have condemned Macron's defense of the cartoons and called for a boycott of French goods.

Turkey has led the charge, with President Recep Tayyip Erdogan saying Macron needs a "mental health check" and accusing him of running an anti-Islamic agenda.

"Never give credit to French-labeled goods, don't buy them," Erdogan said on Monday during a televised speech.

France is the 10th biggest importer to Turkey, and Turkey is its seventh biggest export market.

France has since issued a warning to its citizens in Turkey to exercise "great vigilance" due to the "local and international" context and to avoid any gathering or demonstration in public places.

Saudi Arabia,the birthplace of Islam, has said it rejected "offensive" images of any of Islam's prophets. "The kingdom of Saudi Arabia rejects any attempts to link Islam with terrorism, and denounces cartoons offensive to the Prophet Muhammad or any of the other prophets," a Foreign Ministry official said in a statement. Social media users in Saudi Arabia and the United Arab Emirates have called for a boycott of French supermarket giant Carrefour.

There have also been protests held in Iraq, Syria, Libya, the Gaza Strip, and Bangladesh, the last of which attracted tens of thousands of demonstrators and included burning effigies of Macron.

Pakistan's Prime Minister Imran Khan said Macron was encouraging anti-Muslim sentiment and was deliberately provoking Muslims. He also summoned the French ambassador to lodge a protest. Protests have also been called in Pakistan and Jordan.

Egypt's Al-Azhar University has denounced the cartoons, saying Macron's comments were part of a systematic campaign to use Islam to win political battles, in comments echoed by the country's top cleric.

The Abu Dhabi-based Muslim Council of Elders said it was planning to launch legal proceedings against Charlie Hebdo and "all those who insult Islam."

The Foreign Ministry in Iran has summoned the French charge d'affaires to strongly reject "any insult and disrespect to the prophet of Islam ... and Islam's pure values of Islam by any person regardless of their position," according to state media.

Libya's UN-recognized Government of National Accord has "firmly condemned" Macron's comments and demanded an apology.

There was also condemnation from the Palestinian Islamist group Hamas, the Taliban in Afghanistan and the Lebanese Shiite movement Hezbollah.

How has Europe responded?

European leaders have rallied around Macron and criticized attacks on him, particularly from Turkey.

In Germany, Chancellor Angela Merkel's spokesman Steffen Seibert said: "They are defamatory comments that are completely unacceptable, particularly against the backdrop of the horrific murder of the French teacher Samuel Paty by an Islamist fanatic."

The prime ministers of Italy,the Netherlands and Greece also expressed support for France.

Dutch Prime Minister Mark Rutte tweeted: "President Erdogan's words addressing President Emmanuel Macron are unacceptable," adding that the Netherlands stood "for the freedom of speech and against extremism and radicalism."

Several EU officials have slammed Erdogan's comments, with the European Commission warning Erdogan that he was further damaging Turkey's hopes of joining the European Union.

What has the domestic reaction been?

In the aftermath of Erdogan's comments, France on Saturday recalled its ambassador to Turkey.

The French Council of the Muslim Faith (CFCM), which is the official go-between for the state and observant Muslims, said in a statement that Muslims are "not persecuted" in France.

"France is a great country, Muslim citizens are not persecuted, they freely construct their mosques and they freely practice their religion," it said.

The head of the CFCM, Mohammed Moussaoui, urged French Muslims to "defend the interests" of the nation.

"We know that the promoters of these campaigns say they defend Islam and the Muslims of France, we urge them to be reasonable... all the smear campaigns against France are counterproductive and create division," he said.

He said French law gave people "the right to hate" the cartoons, but said he supported Macron's stance.

France's largest trade association, Medef, also said it supported the French government. Association head Geoffroy Roux de Bezieux told French broadcaster BFMTV: "I call on the companies to resist the blackmail and unfortunately to endure this boycott for the time being."

He said there were "times when we have to put principles before the opportunity to expand our business."