An ex-aide to President Macron has been handed multiple charges after video footage showed him beating protesters. Opposition lawmakers want to know why Macron failed to immediately report the incident to authorities. 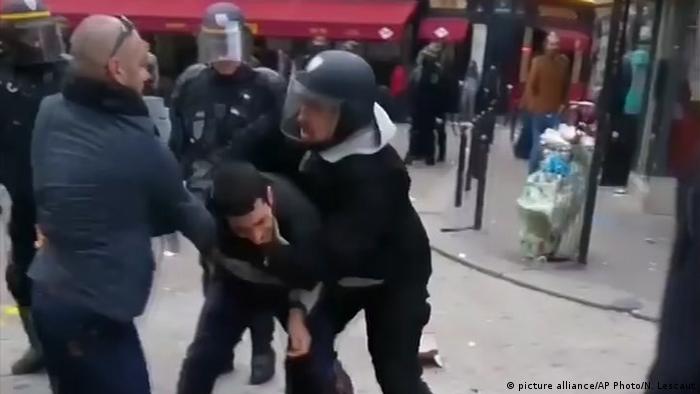 A judge on Sunday handed preliminary charges to a disgraced former security aide to French President Emmanuel Macron and four others involved in an alleged attack on unarmed protesters in May.

Alexandre Benalla, who had accompanied Macron since before the 2017 presidential election, was charged, among other things, with violence, interfering in the exercise of public office and impersonating a public official.

An official in Macron's Republic on the Move (LREM) party who was next to Benalla when the attack happened, Vincent Crase, was charged with the offense of violence, and three police officers suspected of illegally giving Benalla police footage of the attack to help him clear his name also face relevant charges.

Macron fired Benalla on Friday after French newspaper Le Monde on Wednesday published video footage showing the 26-year-old aide wearing a police helmet while beating a man and dragging a woman during May 1 demonstrations in Paris. Macron's office said Benalla had only been authorized to join the police as an observer.

Crase and Benalla, whose house was raided on Saturday, are now prohibited from possessing a weapon or holding public office.

Opposition parties have sharply criticized Macron for failing to immediately report the attack and slammed his office's allegedly soft and inconsistent response to the incident.

Interior Minister Gerard Collomb is set to face lawmakers this week to answer questions over why the president allowed Benalla to keep his job for months after the attack.

But lawmakers have also questioned why Benalla was seen accompanying Macron during a July 14 national holiday. The president's office said it gave Benalla a two-week suspension and transferred him from the president's security detail to an administrative role after learning about the incident in May.