France, Germany Positive About Lebanon′s Future | Germany | News and in-depth reporting from Berlin and beyond | DW | 10.06.2008

The foreign ministers from Germany and France expressed optimism over Lebanon's political future at a meeting this week. 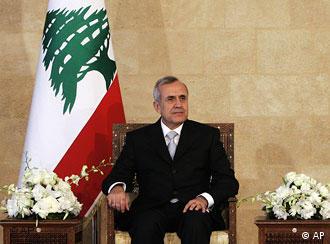 Suleiman's election was seen as pivotal for Lebanon

The election of Lebanese President Michel Suleiman by parliament in Beruit last month is a reason for optimism, according to German Foreign Minister Frank-Walter Steinmeier and his French counterpart, Bernard Kouchner.

Suleiman is well aware of the need for reconciliation in Lebanon, aides to the ministers said on the sidelines of a top-level meeting of their respective governments in the Bavarian town of Straubing.

Steinmeier phoned Syrian Foreign Minister Walid al-Moallem on Sunday to remind him of Syria's pledge to exchange ambassadors with Lebanon, a spokesman for the German foreign minister said.

Syria has been the powerbroker in Lebanon for nearly three decades. Germany has held the Syrian government responsible for the six-month delay in electing a Lebanese president.

French President Nicolas Sarkozy has also said he wants to renew ties with Syria, in response to the recent breakthrough in Lebanon's drawn-out political crisis.

"This visit is part of a new page we hope will be turned and written in relations between France and Syria, insofar as recent positive developments continue," said foreign ministry spokeswoman

While the foreign ministers were optimistic about Lebanon, they did not expect progress in the Israeli-Palestinian peace process, initiated by US President George W Bush last year. Aides predicted the peace process will remain "very difficult."

Germany's President Horst Koehler congratulated Michel Suleiman on his election as Lebanon's new president, saying the appointment was "an encouraging step to overcoming the internal crisis" in Lebanon. (25.05.2008)