France elections: What you need to know

Emmanuel Macron and Marine Le Pen are going head-to-head in France's runoff presidential election on Sunday. Here's what you need to know. 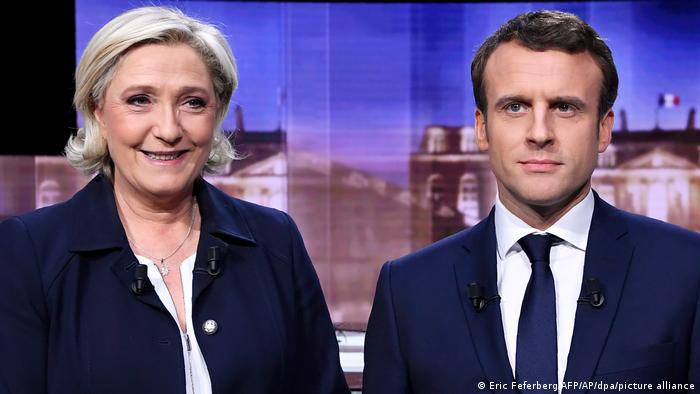 France will vote in a runoff presidential election between Emmanuel Macron and Marine Le Pen on Sunday.

The vote will determine who will lead the European Union's second-largest economy and the bloc's only permanent UN Security Council member.

Here's what you need to know:

How did the first round go?

Macron and Le Pen emerged as the top two candidates from a pool of 12 in the first round on April 10, winning 27.85% and 23.15% of the vote respectively. Left-wing populist Jean-Luc Melenchon narrowly missed out, with 21.95% of the vote.

As no one reached an outright majority, the top two candidates, Le Pen and Macron, progressed as the only two options in Sunday's second round.

In the two weeks since, the two contenders have tried to rally the voters of their first round rivals, especially those of Melenchon.

Both candidates have attempted to broaden their support, making 11th-hour changes to their platforms.

Who are the two candidates facing in the runoff?

The 44-year-old is marketing himself as a stable force during a time of crisis, pointing to his leadership during the coronavirus pandemic and the Russian invasion of Ukraine.

Mocked as the sun king, Macron's chief hurdle is his image as an out-of-touch elitist. His term has been marked by ups and downs. The so-called yellow-vest movement in 2018 was triggered by his business-friendly policies and tax cuts for the wealthy.

Le Pen, a far-right populist from the National Rally party, has campaigned on a hard line on immigration and upholding traditional French identity, as well as helping struggling households.

But she has been criticized in Europe for her 2017 stance against the EU and NATO — two major players in the response to Russia's invasion of Ukraine. She is often criticized as being cozy with autocrats.

France's response to the war in Ukraine, strains on the health care system triggered by two years of the pandemic and the economy are all high among voter concerns.

Tackling a surge in energy and food prices has been at the core of both campaigns.

Macron has promised to raise the minimum level of pensions, increase hiring in the health sector and to prioritize gender equality and school harassment.

He has also promised more tax cuts for companies, thousands more police officers and judges and to raise the retirement age to reduce the pension system's massive debt.

Le Pen, 53, has pledged to hold a referendum on strict immigration controls, stipulating that residency applications can be made only outside France. She would prioritize French nationals for housing and other social services ahead of foreigners.

She has also promised 25,000 new places in prison and extra police. Since the first round, she appears to have softened her divisive stance on banning the Muslim headscarf in public spaces.

Le Pen's other promises include a substantial cut in taxes on fuel and electricity, and rises in pension payouts.

When will we see a result?

Most polling stations close at 7 p.m. local time, but in larger cities such as Paris some voting sites close at 8 p.m.

Exit polls — normally very reliable — are expected at about 6 p.m. GMT/UTC. Official results are expected the next day.

If Macron wins, it will the first time a French president has been reelected since Jacques Chirac in 2002.

France elections: What would a Le Pen victory mean for India?

The outcome of the French presidential election could have an impact on the future of the EU's Indo-Pacific ambitions and regional trade.

France: A Le Pen victory a burden on France's budget?

President Macron's economic manifesto doesn't enthuse every French voter. But when it comes to the plans of his opponent Marine Le Pen, economists have said they could have severe financial consequences.

French elections: What the president's furniture says about France