France Calls for More European Effort in Fight for Afghanistan | Europe| News and current affairs from around the continent | DW | 17.09.2008

France Calls for More European Effort in Fight for Afghanistan

French Defense Minister Herve Morin added his voice to the chorus of unease and frustration over Europe's commitment to military operations in Afghanistan when he called for more troops and the end of national caveats. 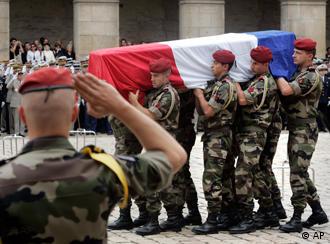 Limits on troop operations and years of military underspending in Europe were damaging the coalition war effort in Afghanistan, Morin said on Wednesday, Sept. 17, as he called on France's European allies to relax restrictions on troop deployment and operations.

France and the United Kingdom were among the few countries which were backing their commitment to the operation with boots on the ground and the necessary finances to assure a successful outcome, Morin said during a visit to Australia to discuss Afghanistan and boost security cooperation between France and Australia in the South Pacific.

France has 3,300 troops serving in the NATO-led International Security Assistance Force in Afghanistan and, after last month's Taliban ambush which killed ten of its soldiers, has said it may send special forces troops back for the first time since 2007. 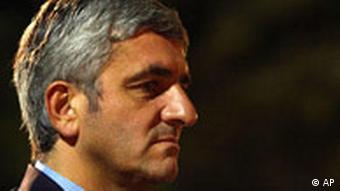 "Most of Europe has made NATO responsible for their security. Therefore, the weakness of Europe is typified by what you see in Afghanistan," Morin told journalists.

One of the major areas of conflict within the coalition is the on-going struggle to get major nations to contribute more to NATO's Afghan force. Increased dangers, a rising death toll and the continued resurgence of the Taliban have added to the strain on those nations with combat troops on the ground and the friction within NATO.

Many NATO countries with troops in Afghanistan, including Germany, have "national caveats" that restrict how their troops may be used, limiting their flexibility. German troops have a reconstruction and security mandate in the north of the country but do not take part in combat operations, a major irritant to countries like the US which have called for the Bundeswehr to engage the enemy in the dangerous southern regions.

Washington's frustration was eloquently verbalized by US Defense Secretary Robert M. Gates last year when he described the problem as a chess game in which one side enjoyed full freedom of movement while the other could only move a single space in a single direction. 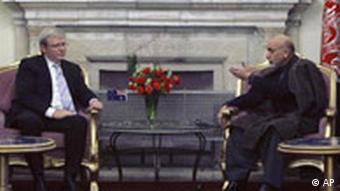 Australia, an original member of the US-led coalition that arrived in 2001 to topple the Taliban and which has around 1,000 troops in the restive Oruzgan province including special forces, has also been critical of the majority of Europe's involvement.

France's Morin said after his talks with his Australian counterpart Joel Fitzgibbon in Canberra that not even "a cigarette paper in width" separated their views.

"We share the point of view that the effectiveness of the forces in place in Afghanistan depends very heavily on the conditions that are applied for their use. Caveats prevent the best possible application of the forces," he said.

Morin added that "rumors and lies" in media reports, and an "almost obsessive denigration of what is being done on the ground" were also damaging the coalition war effort and eroding public support for the war in western countries. 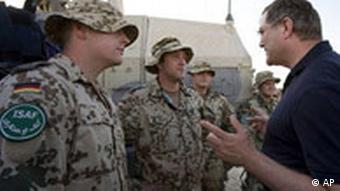 Germany's Jung was in Kunduz earlier this month

He also revealed that he and Fitzgibbon, and German Defense Minister Franz Josef Jung, hoped to visit Afghanistan in December to inspect security for themselves.

Jung recently returned from Afghanistan, where he had met with tribal leaders to express his country's sympathy after German troops shot and killed a woman and two children who failed to stop at a roadblock, leading to fears of reprisal attacks.

Last month was the deadliest for foreign troops since the conflict began, according to the independent Web site icasualties.org. Forty-three troops were killed, including the ten French soldiers hit in a single Taliban ambush.

Germany's cabinet has approved a funding increase to help rebuild Afghanistan. But with violent attacks also on the rise, some question whether the country is ready for reconstruction -- or still in a state of war. (09.09.2008)

Afghan President Hamid Karzai has said relations with international forces backing his government have been frayed because of the killing of more than 90 civilians during a recent strike by US-led coalition troops. (04.09.2008)

Despite the increasing number of attacks on German soldiers in Afghanistan, prematurely withdrawing troops would leave behind a dangerous power vacuum, said DW's Martin Gerner. (03.09.2008)