Germany's Sebastian Vettel produced a scintillating drive in his Ferrari to win the first race of the new Formula One season. Mercedes driver Lewis Hamilton was on pole but couldn't live with Vettel in a thrilling race. 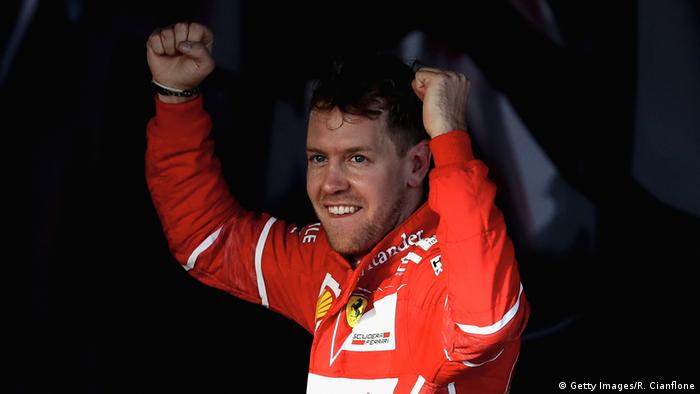 New cars, new rules, new owners - and a shake-up to the familiar order. The new Formula One season started with a bang as Ferrari's Sebastian Vettel produced a superb drive to win by almost 10 seconds in Melbourne.

Lewis Hamilton was the prerace favorite and started on pole in Australia for the fourth time in his career. The Briton began well and held onto the lead out of the first corner, but Vettel was in hot pursuit.

Hamilton protected his lead, but the race started to swing in Vettel's favor when Hamilton was the first of the leaders to pit on lap 18 to swap his ultra-soft tires for the soft.

That gave Vettel the advantage when he came in five laps later, emerging just ahead of Verstappen and a frustrated Hamilton, whose Mercedes team swiftly instructed him to execute their "plan B" which suggested a second stop might be in the offing. However, Mercedes decided to stick to their one-stop strategy in the end.

Hamilton simply had no answer to the raw speed of Vettel's Ferrari, which lived up to the prerace speculation that the new car could give Mercedes a run for its money this campaign. The four-time champion was able to keep a firm grip on the second half of the race and opened up a decisive gap at the front - one that ultimately proved too much for Hamilton to bridge.

The Briton complained on lap 44 of "power dropping in and out" but at this point he was floundering and finished only 1.2 seconds ahead of his new Mercedes teammate Valtteri Bottas.

Verstappen finished fourth but it was a miserable afternoon for his Red Bull teammate Daniel Ricciardo, who suffered electrical problems before the start of the race and, after starting from the pit lane, eventually had to retire.

For Vettel it was a perfect race, his first victory since the Singapore Grand Prix in September 2015, and a dream start to the new season.

"A title challenge is a long way ahead. For now we are just over the moon at the start we have made here today," Vettel said.

"I was not entirely happy with my start, there was a bit of wheel spin, but I was trying to keep the pressure on to give the message that we are here to fight."

Australian Grand Prix - as it happened:

Paddy Lowe has joined the Williams Formula One team from Mercedes. The Briton has been appointed as Williams' chief technical officer and has been made a shareholder in the racing group. (16.03.2017)