Formula One practice: Vettel sets quickest ever lap at Monaco

Ferrari's Sebastian Vettel smashed the Monaco lap record in practice for Sunday's Grand Prix. Fellow contender Lewis Hamilton was quickest in first practice but was way down the timesheets in the later session. 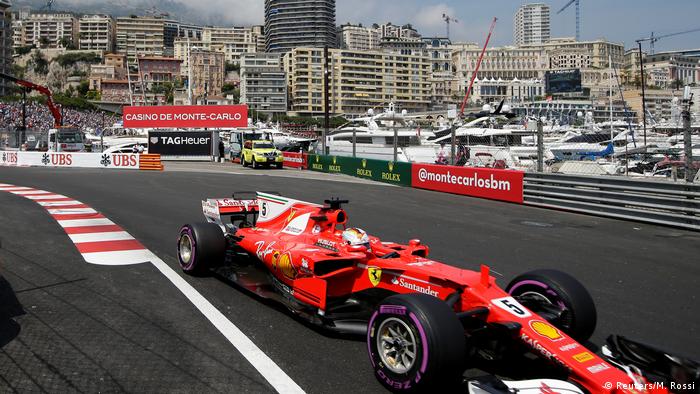 Ferrari driver Sebastian Vettel lapped faster than ever in second practice for the Monaco Grand Prix after rival Lewis Hamilton had set a new benchmark for the street circuit in first practice.

Mercedes driver Hamilton first edged out championship leader Vettel by 0.196 seconds as he notched a best lap of one minute 13.425 seconds.

But in second practice for Formula One's showcase race, German's Vettel hit back with a quickest time of 1:12.720. Britain's triple champion Hamilton was way back as eighth fastest.

F1 cars are much quicker this season under new regulations.

First and second practice uniquely take place on Thursdays in Monaco with Friday a day off ahead of Saturday qualifying and Sunday's race.

He is hoping to end Ferrari's long drought in the most glamorous - and slowest - race on the calendar with a first Ferrari win in the Mediterranean principality since Michael Schumacher in 2001.

Britain's Jenson Button returned to the cockpit as a McLaren stand-in for Fernando Alonso, who is competing at the Indianapolis 500.

The 2009 champion was 14th fastest in first practice, 1.529 off the pace, in a solid performance for a driver who has not been in a Formula One car since last November.