When Bernd Schuster left Cologne for Barcelona in 1980, he was one of the first Bundesliga players to move to Spain. He spoke to DW about his move and two Germans who followed in his footsteps decades later.

DW: Bernd Schuster, you were one of the first German players to have a successful career abroad. How did it come about?

Bernd Schuster: It was kind of strange. I had never considered going abroad. I was still really young, I was at the start of my professional career. As you say, it wasn't so common for German players to go abroad back then. The Bundesliga was the league in Europe. It wasn't really planned, but I had certain problems in Cologne and from one day to the next I was in Barcelona, Spain. Looking back now it wasn't the worst decision I've ever made.

How difficult was it for you to learn the language?

It wasn't difficult at all because I was really interested in learning it. I couldn't speak a word of Spanish when I got there, not even buenas dias or gracias. I was fortunate because the team doctor had studied in Germany and spoke fluent German, so he was kind of my translator at first. And then I learned Spanish unbelievably quickly.

And how was it on the pitch?

There it was even easier. There it's not so much about the language, it's more about the movement of the other players. I could just yell – even if it was in German or English, but I quickly learned the five or six key words that are most commonly used on the pitch, and once you know those, you can get along pretty well.

There are still just two Germans in La Liga, Marc-Andre ter Stegen and Toni Kroos. Why do you think so few players choose to leave the Bundesliga and go abroad? 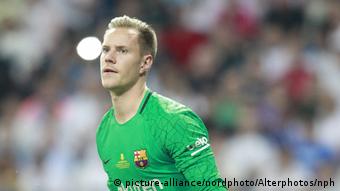 One could argue that neither ter Stegen nor Kroos has had the best of seasons.

As for ter Stegen, he has really earned the starting job in Barcelona and in my view he is absolutely the No. 1 – and that goes for Germany too. Toni Kroos had a really good run for three or four years, winning the Champions League and having all kinds of success apart from that. It's always difficult to keep performing at 100 percent year in and year out, leaving everything on the pitch. You are bound to have a year when things don't go your way, and this was true also for Real Madrid in general. However, I think we can expect things to change next season.

As you mentioned, this wasn't the greatest year for Real Madrid, particularly by their high standards. As a former Real Madrid coach yourself, what do you think has gone wrong and what does your former club need to do to turn things around?

They need to sign players, particularly strikers. They didn't score enough goals this season. The problem wasn't so much the defense or midfield, but when a player who scores 50 goals a season suddenly leaves, as Cristiano Ronaldo did – someone who was a driving force in Madrid  for 10 years – it leaves big shoes to fill. That's the main problem, but they will solve this and I think then they will be as strong as ever again.

Bernd Schuster, 59, is a former midfielder who played for several clubs, including Cologne, Barcelona, Real Madrid, Atletico Madrid and Bayer Leverkusen. He also made 21 appearances for West Germany and was part of the team that won the 1980 European Championship. After hanging up his boots, Schuster coached a number of clubs, including Cologne Shakhtar Donetzk, FG Getafe, Real Madrid and Besiktas.

The interview was conducted by Hecko Flores at the 2019 German Football Ambassador awards ceremony in Berlin.

Two of the three most successful clubs in European history meet in the Champions League final on Saturday in Paris. But in a season defined by events off the pitch, the specter of the state-owned clubs looms large.