An ex-spokeswoman for the former Yugoslavia war crimes tribunal was detained in The Hague on Thursday. The unexpected drama came shortly before the verdict in the trial of Bosnian Serb wartime leader Radovan Karadzic. 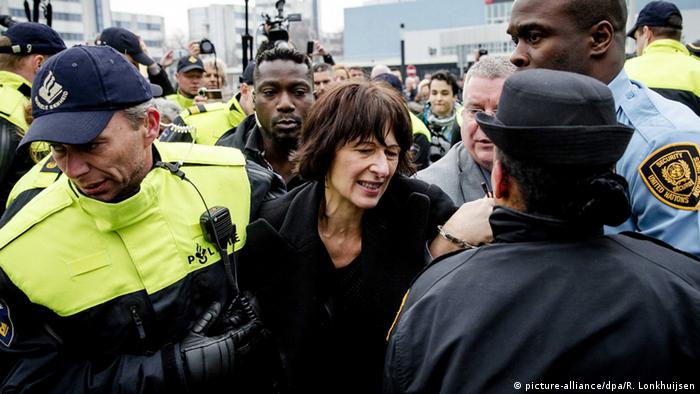 The former Balkans correspondent for the daily "Le Monde", Florence Hartmann, was detained outside the tribunal building while waiting for the verdict handed down to Radovan Karadzic on Thursday.

Two female guards tried to grab Hartmann during a TV interview, while she was surrounded by relatives of Karadzic's victims. The victim's family members attempted to shield her, prompting a short scuffle that ended in guards calling for back up.

Hartmann is popular among Bosnian war survivors for her claims that Belgrade and The Hague tribunal made a deal to diminish Serbia's involvement in the Bosnian war. The Thursday incident, however, follows her conviction for contempt of court over publishing confidential material in her 2007 book "Peace and Punishment."

The guards, backed by Dutch police, eventually managed to drag protesting Hartmann away and into the court building, where she briefly collapsed on the ground, according to an AFP reporter at the scene.

From 2000 to 2006, Hartmann worked as the spokeswoman for the chief Hague prosecutor at the time, Carla Del Ponte. During this time, the UN tribunal put several top leaders from former Yugoslavia on trial, including ex-president of Serbia Slobodan Milosevic. The Balkan strongman, however, died before the verdict.

Hartmann also drew attention in the Balkans by being a fluent Serbian speaker, one of the few among high-ranking court officials.

A year after Milosevic's death in 2006, Hartmann published the book revealing details of two confidential court decisions during his trial. In 2009, she was ordered to pay a 7,000 euro ($7,820) fine, which she refused to do. Two years later, the UN court replaced the fine with a seven-day jail sentence, and asked French authorities to arrest Hartmann.

The French Foreign Ministry refused to comply, claiming the country was not obligated to act on contempt charges.

"That was absolutely ridiculous what happened today," Del Ponte said from Geneva. "What I hope is that she will be released immediately."