A court has sentenced 48 people to prison for crimes committed at a notorious torture center run by Argentina's junta. More than 30,000 people were kidnapped, tortured and killed in the 1976-83 "dirty war." 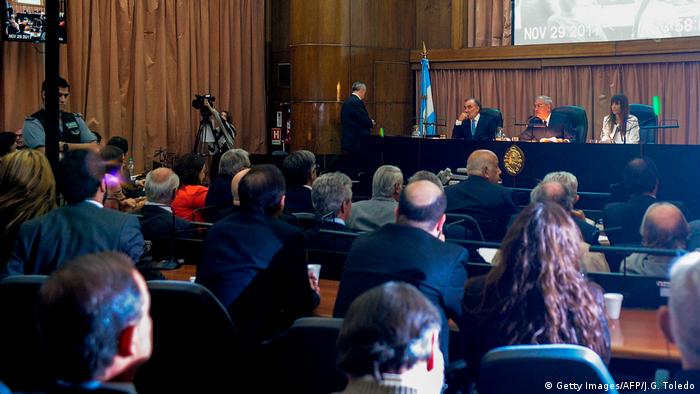 A court on Wednesday sentenced 29 former soldiers to life for crimes against humanity during Argentina's 1976-83 military dictatorship. Nineteen defendants received sentences of between eight and 25 years. Six were acquitted.

Mario Daniel Arru and Alejandro Domingo D'Agostino received life sentences for piloting death flights, in which they killed dissidents by throwing them out of airplanes into the river or sea. Victims included Alice Domon and Leonie Duquet, two French nuns abducted in December 1977. Investigators found the remains of Duquet in a mass grave with six others on Argentina's Atlantic coast about 400 kilometers of Argentina's capital, Buenos Aires. Domon's remains have not been recovered.

Alfredo Astiz, known as the "Blond Angel of Death," and Jorge Acosta, nicknamed "The Tiger," also received life sentences for several crimes, including the 1977 disappearance of the 17-year-old Swedish citizen Dagmar Hagelin. Courts had already sentenced both men to life in prior trials.

Seeking justice for 789 named victims of the Naval Mechanics School (ESMA) — the junta's biggest clandestine torture center, which held an estimated 5,000 prisoners, only a few hundred of whom survived — prosecutors called about 800 witnesses during the five-year trial, Argentina's largest yet. In prior proceedings that concluded in 2011, Argentina's judiciary handed life sentences to 16 former soldiers for crimes against humanity committed at the ESMA.

Outside of the courtroom on Wednesday, hundreds celebrated as judges read the latest round of sentences. Some held a large poster with photos of the 54 defendants with a letter P for "perpetua," referring to life sentences, scribbled over the men's faces. Others held banners about the disappeared that read: "Tell us where they are."

The dictatorship killed 30,000 Montonero guerrillas, labor union leaders, students, leftists, and their relatives and friends. The majority of the bodies remain missing.

Argentina has attempted to prosecute many dictatorship-era crimes. Last year, a court convicted 15 officials of conspiring to kidnap and assassinate dissidents during the US-backed Operation Condor, which killed 60,000 to 80,000 people in six Latin American nations from 1975 to 1989. Earlier this year, however, the Supreme Court decreased jail time for human rights abuses, stoking fears of a backslide.

Those fears were not assuaged when Santiago Maldonado, an activist who called for solidarity with indigenous people attempting to recover their ancestral lands from the Italian clothing company Benetton, disappeared under mysterious circumstances during the summer. Maldonado's drowned body was found over two months later; officials say he died of natural causes.