Former combatants in the Philippines: "I'm no longer afraid."

After decades of armed conflict, some 40,000 combatants on the Philippine island of Mindanao are being disarmed. They belong to the Muslim minority. Former combatants reflect on how things have started to change. 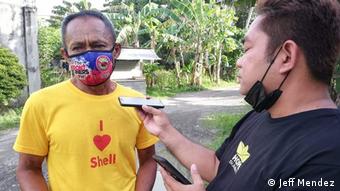 Ebrahim recounted his story in an interview with DXMS, a radio station in Cotabato City. The program is part of "Conflict Transformation in the Philippines", a project by the non-governmental organization Nonviolent Peaceforce (NP) with support from DW Akademie. "We want former fighters to have an opportunity to tell their own stories as well as their hopes and their wishes," said NP project manager, Marlon Dedumo.

The interviews are not just for building bridges between different population groups but, above all, for encouraging other combatants to lay down their weapons – as Ebrahim has.

More self-determination instead of armed struggle 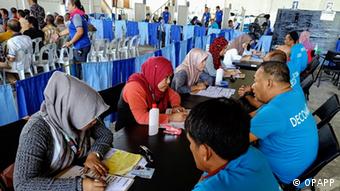 The goal is to end a conflict that began in the 16thcentury with Christian Spanish colonizers. It intensified from the 1970s. For decades, there were clashes between the army, Muslim rebels, communist guerrillas, regional family clans, indigenous peoples as well as Islamist terrorist groups including the Islamic State (IS) and Abu Sayyaf. At least 150,000 people have died and several million have been displaced. Behind this religious-ethnic conflict lies a bitter struggle for land and economic resources as well as social and cultural recognition. While fertile land is now largely owned by non-Muslim settlers from other parts of the country, half of the Muslim population lives below the poverty line. 30 journalists have been trained in conflict-sensitive reporting

It remains to be seen whether the recent peace deal will hold. There are still violent attacks by Islamist groups that are not part of the agreement as well as skirmishes between hostile families. In situations like these, the media can be crucial for de-escalating tensions and promoting dialogue. However, the media there are currently under severe pressure given the pandemic, slipping revenues resulting from growing competition on the Internet, and major political restrictions and even violence.

"Still, it's extremely important to overcome reporting that polarizes people, and to show all sides, including those that aren't so easy to see," said DW Akademie program director, Andrea Marshall. As a result, 30 journalists have since been trained in conflict-sensitive reporting. The radio stations DXMS Cotabato and DXIC Illigan have developed formats together with former combatants and have organized forums that focus on the peace process. Due to the pandemic, some parts of the project have taken place online.

Start-up capital for a new beginning

Much will depend on whether former fighters are successfully integrated into civilian life. The central government is giving one-time financial support to former fighters and has announced an aid package for education and housing. The Nonviolent Peaceforce and other organizations are helping with integration.

In radio interviews, former combatants described the effect the transition was having on them. One said he had used the start-up money to buy a cow and lease a bit of land, and now hoped to build his own house.

A 24-year-old ex-combatant said he had worked as a security guard and was now aiming to become a policeman. And a former insurgent who had long fought with the Bangsamoro Islamic Women's Auxiliary Brigade said she hoped women would soon have better paid work.

Ebrahim D.C. for his part said it was important that the government now saw him as a peaceful citizen and that his grandchildren were able to go to school. And all agreed that the best thing about being part of civilian life was that the fear is gone.

DW Akademie is mainly active in Asian countries which are undergoing major political changes. These are precisely the states in which professional media are necessary and sought after.