Seven-time Bundesliga winner Jupp Heynckes has been awarded DFB’s Lifetime Achievement award by the German Football Association. The prize was presented at the final night of a German FA coaches course. 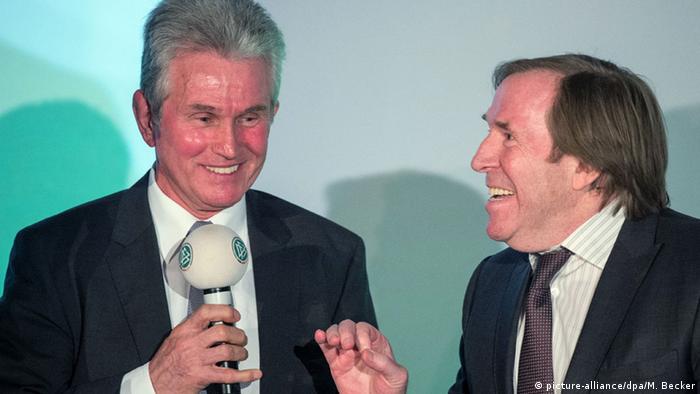 Former Bayern Munich coach Jupp Heynckes has become the fifth coach to be recognized for his "life work in coaching" by the German Football Federation (DFB).

The 69-year-old started his coaching career in 1979 at Borussia Mönchengladbach where he had just brought to an end a goal-laden career at the height of the Foals success in Germany and further afield.

Having already been voted FIFA World Coach of the Year for 2013, Heynckes collected another award in Bonn on Monday at the 61st Fussball-Lehrer course gala night - an event which celebrates Germany's brightest young coaches completing the DFB's intense and prestigious coaching program.

"Jupp Heynckes has influenced German football for many decades as a player and coach," said current DFB president Wolfgang Niersbach. "His unique achievements in the Bundesliga and abroad speak for themselves."

Heynckes' last involvement was to lead Bayern to the treble in 2013 and despite offers from Spain, he admitted that half a century in professional football was enough. The top-honor for a German coach has only been collected by four others: Dettmar Cramer, Udo Lattek, Gero Bisanz and Otto Rehhagel.

Meanwhile, Germany women's U20 coach Maren Meinert took the prize of German Coach of 2014, awarded by a select panel that honored her "outstanding services to youth development."

"You continue to develop talents, yet at the same time you still win titles," said Niersbach of the 41-year-old.