Three new astronauts are on their way to the ISS. DW asked Thomas Reiter, the German coordinator of the ISS program, what advice he would offer them, and if he wouldn't rather be up there himself. 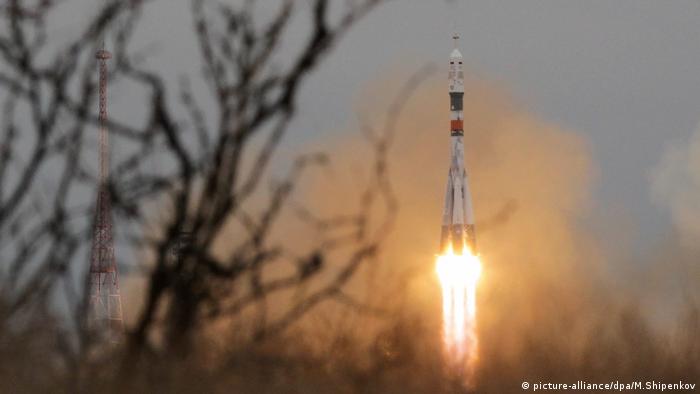 At 9:30 p.m.Thursday (German time), a team made up of two rookies and one seasoned veteran will be getting ready to blast off to the International Space Station (ISS). The time at their departure point of Baikonur in Kazakhstan will be 1.30am, or 8.30pm UTC.

German astronaut Thomas Reiter has also been "up there". He is the most experienced European astronaut, and now works as the European Space Agency's Coordinator in the ISS Program. He is quick to answer if he would like to visit space again, and he has some important advice for the team that is on its way up there:

Three Astronauts are on their way to the ISS - are you a little bit jealous?

American astronaut Peggy Whitson has already spent more than one year in outer space. This time round, with Oleg Nowizki from Russia and Thomas Pesquet from France alongside her, she will be en route for two days, before reaching the ISS on Sunday. The three of them will then join the 50-strong crew on board, and will work there for around six months.

Peggy Whitson will be breaking two records on this trip: at 56 years old, she is the oldest woman ever to fly into space, and she will be the first woman to return to the position of ISS Commander.

Why are people so fascinated with outer space? For Reiter, it is curiosity that drives him exploring space and searching for undiscovered planets. He is very clear on whether or not he would be willing to swap life on Earth for life on Mars:

In principle, would you be willing to trade life on Earth for life on Mars?

This flight also has the youngest ESA astronaut, Thomas Pesquet, on board. According to Reiter, the 38-year-old belongs to a generation of astronauts that might make it to Moon.

He is sure that a mission to Mars will be launched in the next 20 to 30 years. But even Pesquet will probably have missed his chance by then.

Mars is the target destination for many space exploration missions. Reiter explains that at the moment everyone is waiting for the answer to one crucial question:

A mission to Mars could also provide answers to other questions. According to Reiter, Mars's history could tell us something about the Earth's future:

Why is Mars of such interest to us on Earth?