Even the Pope urged selling it and on Tuesday, German bishops caved in: the Catholic Church is giving up its stake in Weltbild, a major publishing group that lists books frowned upon by Catholic doctrine. 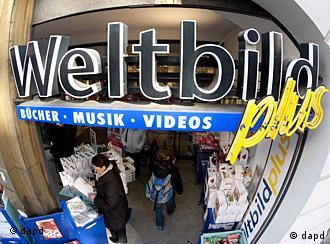 Theory and practice were too far apart for the church

Weltbild publishing group is co-owned by 12 German dioceses which have now agreed to sell their share in the profitable enterprise as soon as possible. They decided on the move because Weltbild's book range includes steamy pulp novels with titles like "Boarding School for Sluts" and "The Lawyer's Whore" as well as books on esoteric practices.

Cologne Cardinal Joachim Meissner said there was no alternative to selling the publishing group.

"We can't make money all week long with something we condemn from the pulpit on Sunday," he said.

Germany's bishops met this week and pressed the 12 bishops whose dioceses co-own Weltbild, based in the southern city of Augsburg, to end the investment after the company had defended its policy of publishing whatever books meet market demand.

A donations scandal in the Philippine Catholic Church has damaged the church's image. It could pave the way for more liberal politics in the conservative country. (15.07.2011)

German Catholic Church to open up internal files on abuse

The Catholic Church in Germany is going to allow a criminology institute access to its personnel records as part of a detailed investigation into possible cases of sexual abuse by clergy, according to media reports. (10.07.2011)

A priest who defied the Nazis by continuing to practice Roman Catholicism despite a ban has been beatified by the Catholic church. Georg Häfner died in a concentration camp for his resistance to the Nazi regime. (16.05.2011)