Concern about strikes and fears of terrorist threats have cast an early shadow on the upcoming Euro championship, but many are resolved to carry on as usual. Elizabeth Bryant reports from Paris. 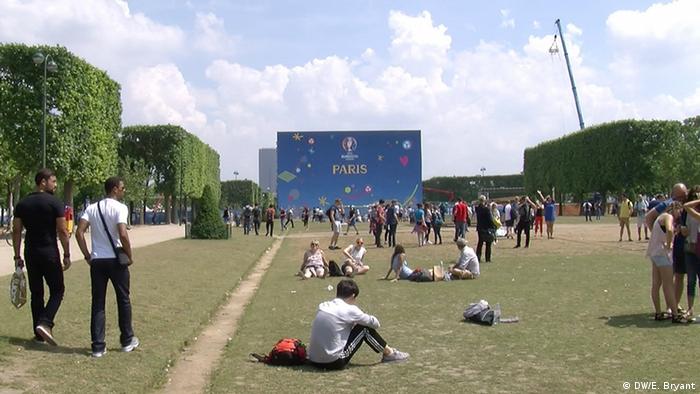 Euro 2016 fans gather under the Eiffel Tower in Paris

Abraham Renteria locks arms with friends and grins for a selfie in front of the Eiffel Tower, where a giant blue banner heralds the start of the month-long UEFA European football Championship.

In a matter of hours, the wide grassy strip in front of the tower will be transformed into a fan zone where thousands can follow on giant screens the games that pit 24 European teams against one another.

"I'm rooting for Spain," says Renteria, a tourist from California, adding that “hopefully the strikes won't affect the games too much.”

After days of torrential rain in parts of France including Paris, the sun is back out and the floodwaters are beginning to recede. But the Seine River still laps over arteries that normally host cars and skateboarders and the Zouave statue at the Alma bridge — a handy measure of water levels — remains knee deep in muddy currents.

There is also considerable worry about the ongoing strikes over an unpopular labor bill that have disrupted rail, fuel and garbage services — and fears of possible terror attacks during the football championship that runs through July 10.

“This threat exists,” President Francois Hollande acknowledged on public radio. “But we must not be daunted. We must do everything to ensure Euro 2016 is a success.”

Still, interviews around town suggest that many here, both French and international, are taking the gloomiest warnings with a Gallic shrug.

“All the plagues striking France — the floods, the strikes, the terrorist threats — I think they are all a bit overhyped,” says Thomasz Mikalski, an economics professor at the HEC business school in Paris. “I doubt they'll have a major impact on the competition itself. But they may have spooked a lot of people from coming.”

“I'm from Grigny — Coulibaly comes from my town,” says Monteiro, referring to Amedy Coulibaly, one of the assailants responsible for the January 2015 terrorist attacks in Paris. “I grew up with him. But I'm not afraid of a terror threat.”

French authorities are taking no chances, however. Roughly 90,000 police, gendarmes and soldiers are being deployed around the country to guard fan zones and the 10 stadiums hosting the matches. France's state of emergency has been extended through July, and security forces have practiced responses to simulated attacks.

This week also saw the launch of a new phone app to alert users of a possible terror strike.

Those fears intensified earlier in the week, when Ukrainian authorities announced they had arrested a French man suspected of plotting to attack the games and seized a trove of weapons.

Of particular concern is the Stade de France, which hosts Friday's opening match between France and Romania. The Paris area stadium was among the sites targeted in November's Paris attacks that killed 130 people.

But Michael Morales from New Jersey, who has tickets for Friday's game, isn't worried.

“Not at all,” he says. “There's bumped up security. You see a lot of military members walking around. And I have faith in our canines.”

With fans planning to fly in from all parts of Europe and travel to matches around the country, Air France pilots are threatening to strike starting Saturday, joining already picketing rail workers. Garbage lies uncollected in some Paris neighborhoods, and a general strike has been announced for Tuesday, when the French Senate is set to examine the labor bill.

“French are known for striking and complaining,” says Tawfik Naji, whose train from Lyon to Paris was delayed twice. “They wait for big world events to make a stance so the government pays attention to them.”

The strike also poses new challenges for Hollande's deeply unpopular leftist government. On Monday, Economy Minister Emmanuel Macron was pelted with eggs during a visit to the Paris suburb of Montreuil.

“For the head of state, at the bottom in the polls, a successful Euro championship — on all levels — is imperative, just eight months from presidential elections,” warned the conservative Le Figaro newspaper.

A new BVA poll shows French public opinion has tilted against the ongoing strikes, but many still oppose the reforms aimed to relax strict the country's strict labor codes in order to help grow the economy.

Still Naji, the Lyon traveler, says he sympathizes with the strikers. Nor will threats of more walkouts disrupt his Euro plans.