Focus on strengths in reaction to peace prize | Europe | News and current affairs from around the continent | DW | 12.10.2012

Focus on strengths in reaction to peace prize

Many European politicians could hardly believe the award. Some are regarding the Nobel Peace Prize as an incentive to continue their work in difficult times. Others are ridiculing the award committee's choice. 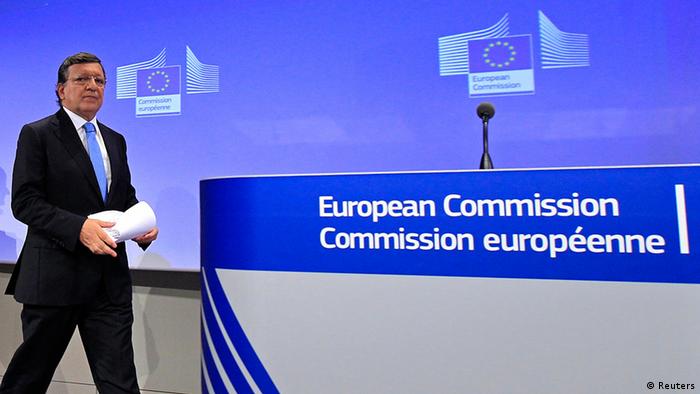 Lately, Brussels has been a rather depressing place to be: the euro crisis continues to be a burden on the European Union, the mood has been somber.

But as rumors about the Nobel Peace Prize began to spread, face lit up. As the Nobel Prize Committee announced its decision at 11:00 on Friday, October 12, a press conference was hastily organized. EU Commission President José Manuel Barroso called it "great honor for the European Union and all of Europe's 500 million citizens to be awarded the 2012 Nobel Peace Prize."

"It is justified recognition for a unique project that works for the benefit of its citizens and the benefit of the world," he said. The award "shows that even in these difficult times, the European Union remains an inspiration for countries and people all over the world," Barroso said, adding that the global community needs a strong EU.

European Council President Herman Van Rompuy expressed pride that the EU's efforts for keeping the peace in Europe have been rewarded. "Europe got through two civil wars in the 20th century, and we have established peace thanks to the European Union," he said. "The European Union is the biggest peacemaker in history." 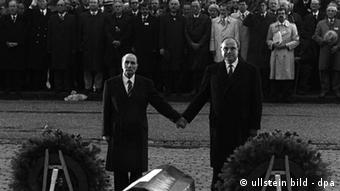 A symbol of reconciliation: Helmut Kohl and Francois Mitterand

Deeply touched, Martin Schulz, President of the European Parliament, called Europe a "unique project" that replaced war with peace and hatred with solidarity. "The EU's principles and values of reconciliation can serve as an inspiration to other regions in the world. From the Balkans to the Caucasus, the EU serves as a beacon for democracy and reconciliation," Schulz said.

Herbert Reul, head of Germany's conservative parties in the European Parliament, pointed out that Germany in particular has profited enormously from the peace and prosperity created by European unity. "Despite the struggle over the best way to overcome the euro crisis, we should never lose sight of the success of the EU peace project," he said.

Rebecca Harms, co-chair of the Greens in the parliament, pointed out that as imperfect as the EU is, it is nevertheless a unique unity and a project of peace: "It is wonderful that the Nobel Committee reminds us Europeans of our strengths!"

Long-time advocates of European integration also congratulated the EU on the award. Europe has carried on despite the crises, said former European Commission chief Jaques Delors. "It's not a long, calm river, but it is consolidating."

Former French President Valéry Giscard d'Estaing said it is right to reward and honor "this extraordinary effort that has been accomplished by the Europeans and their leaders to establish a lasting peace on their continent - historically ravaged by war."

NATO Secretary General Anders Fogh Rasmussen as well honored the vital role the EU has played "in healing the wounds of history and promoting peace, reconciliation and cooperation across Europe.

Not all reaction was favorable, however.

British euro-skeptics in the European Parliament mocked the award. Martin Callanen, chairman of the European Conservatives and Reformists group, called it a belated April Fool's prank, stating ironically: "Presumably, the prize is meant to honor the peace and harmony on the streets of Athens and Madrid." Nigel Farage of the UK Independence Party pointed out the EU has created immense enmities between northern and southern European states over the past two years.

In this sense, reaction to the award has been mixed in Brussels: while the majority believes the recent history is proof that present crises can also be overcome, a minority feels the integration project has failed.

Journalists in Brussels gave President Barroso a round of applause as he reacted to the Nobel Peace Prize announcement. But EU officials were keen not to display any excessive signs of celebration. (12.10.2012)

The 2012 Nobel Prize in the field of chemistry has been announced. The winners are two chemists from the United States. (10.10.2012)

The winners of the Nobel Prize for Physics have been announced. It goes to an American and a Frenchman for contributions in Quantum Physics. (09.10.2012)