Focus on relationships between refugees and local community

Linking South Sudanese and Ugandan media and journalists through training and cross-border activities supports an urgent need for non-biased and conflict-sensitive information. 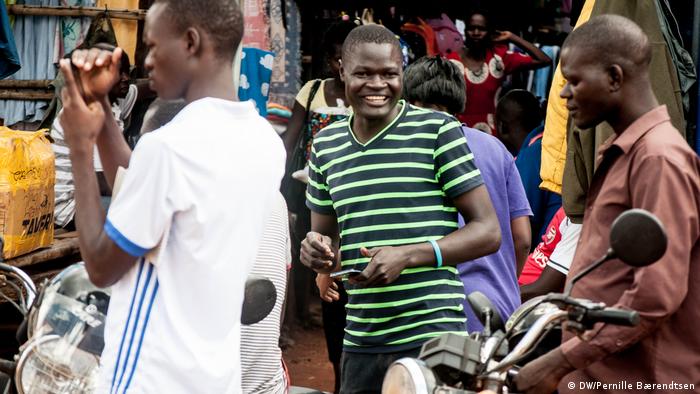 Michael Ojok on the street in Gulu during a field work session at the DWA training in 2017.

When Michael Ojok prepares for his weekly 30-minutes radio programme called ‘Focus on Refugees’ on Speak FM in Gulu, Uganda, he is looking for angles which can help improve relationships between South Sudanese refugees and local community. He focuses on perspectives which connect the current challenges of the refugees to the still recent experience of Gulu residents with conflict.

Gulu is a small town situated in the tropical forests of northern Uganda, still recovering from the insurgency caused during the 1980s up to around 2007 by Lord’s Resistance Army (LRA). Michael believes that the recent past puts the local residents in a position where they may sympathize with refugees. He recalls a recent experience where a listener called him after one radio programme where Michael had interviewed refugees praying for peace in Gulu: "A man called me from Amuru District, and said that when the insurgency of LRA was the highest some of them also used to pray. The man wanted to express how he felt the refugees were doing the right thing."

The relationship between the local Ugandan host community and the South Sudanese refugees is usually good, Michael explains. However, there are also problems, and both sides should be covered. 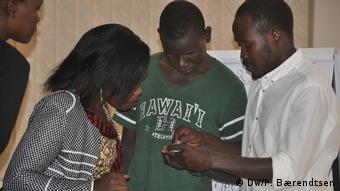 Within a week it is possible to learn to edit and record content for radio by only using free apps on the mobile phone.

The radio programme ‘Focus on Refugees’ was established in June 2017. It was brought forward by the training which Speak FM - along with a group of South Sudanese refugees from settlements in Adjumani - received from Deutsche Welle Akademie (DWA). The training focused on how to use the mobile phone for creating content for radio. The aim is to make it easier for radio stations to draw upon contributions from reporters in remote refugee settlements via new technology.

Since the conflict erupted in Juba in December 2013, more than a million South Sudanese have fled into Uganda. The influx of the refugees increased during July 2016 as the violence spread to Equatoria, the part of South Sudan bordering to Uganda. Some of the refugees who settled in Adjumani District did also take part in the training offered by DWA, and Michael was fast to see opportunities: "When I have identified the topic of the radio programme, I call them (ed., his former co-trainees) to get their views of the refugees as well as to get me in contact with local officials."

It is a big change to earlier, Michael explains: "Before the training I only had one contact in Adjumani, the local government leader (LC5). Now, I know more, and I can call them so that I have access to the refugee settlements through them." The difference from only speaking to the LC5 as the only source to having a diversity of sources is important, Michael says: "That means that there is a diversity of sources and voices, and that brings about different experiences. It creates more nuances." 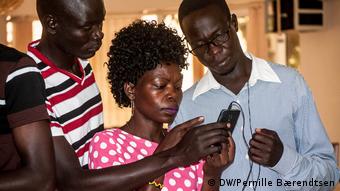 There are still challenges. Ideally, Michael should receive recorded interviews from Adjumani. However, the mobile network in remote areas of northern Uganda is typically not as efficient as in the urban areas, and the people who underwent the same training as Michael do also face problems not always having money for sufficient data bundles and airtime. If it does not work, he tells reporters to ask around and report back via calls.

"Who can best answer what the needs of a refugee are in a camp than a refugee?" asks station manager Jane Angom, and adds that residents of Gulu often may question refugees’ behavior: "To understand such dynamics, we had to speak to the refugees themselves in an interactive radio programme’, she concludes."

The training pays emphasis on thinking out of the box and seeking dialogue, which supports Speak FM aims at taking part in the solution towards a more peaceful co-existence among the host communities and the refugees.

Speak FM is a non-partisan community radio station with a focus on issues relevant for the local community. The radio is found in Gulu town in northern Uganda, and the signal covers the Acholi sub-region, parts of Lango and West Nile including parts of South Sudan, Nimule and Magwi.

Speak FM is one among the 19 radios from the border region of South Sudan and Uganda which have linked up in a transnational radio network with a goal of sharing reliable information, speaking out against rumors and fake news, and defusing prejudices. The network, supported by DW Akademie, offers a chance to promote relationships between refugees and host communities. The network draws on the reporters which have received training from DW Akademie on using the mobile phone for reporting.

While a peace deal between the government and rebels in South Sudan hangs in the balance, thousands of refugees continue to turn their backs on the war-torn country. Their plight is worsened by the rainy season. (14.08.2015)

On October 11, DW Akademie opened an office in Kampala. With its presence in Uganda, DW Akademie, in cooperation with local partners, is strengthening its commitment to international free media and freedom of expression. (17.10.2017)