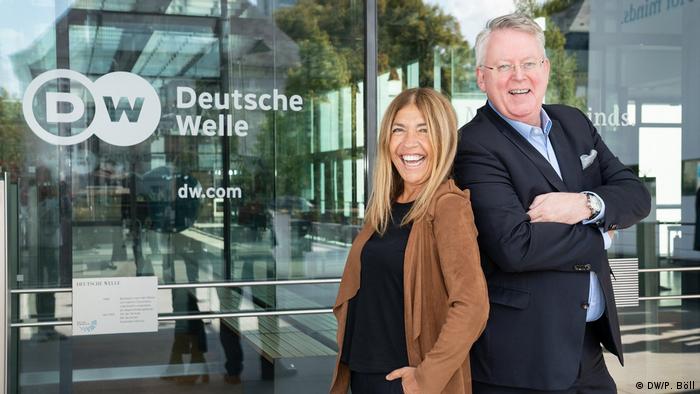 The exchange focused on the challenges of the Covid-19 pandemic for international media organizations, the current political framework for European and global media initiatives, and joint projects in 2021.

France Médias Monde and DW reaffirmed their intention to continue to cooperate on editorial content relating to several European news highlights, and amplify co-anchored talk shows on their English-speaking channels on topics such as climate change, migrations, elections...

The Covid-19 pandemic did not put a stop to their teamwork: at the height of the crisis, France 24 and DW co-produced debates about the health situation in Europe and produced a program at the French-German border when the travel restrictions between both countries were lifted last June. Both groups’ shared commitment to supplying trustworthy information to people on every continent underlined the importance of the public service they provide around the world, as attested by the all-time-high audiences they both recorded during this period.

Marie-Christine Saragosse, Chairwoman and CEO of France Médias Monde: “The growing cooperation between France Médias Monde and Deutsche Welle is more than just a partnership: it is the tangible result of our eagerness to work together around the values we share and our ties of friendship, to spread Europe’s awareness and push back against obscurantism and fake news in the information war and the battle of ideas raging around the world. The ongoing health crisis has only strengthened our shared determination to fulfil our essential public-service duties in a variety of languages and around the planet.”

DW Director General Peter Limbourg: "The impact of international public service broadcasting is growing significantly from year to year, as our impressive usage figures show. People worldwide are taking great interest in credible reporting from Europe, not only in times of a pandemic but also in regard to the unstable geopolitical situation and other topics. Together, we can meet this high demand for independent information."

Both groups also made considerable progress on their shared digital information project ENTR, which targets young Europeans, stems from the Aachen Treaty and has been endorsed by both countries. France Médias Monde and DW replied to a call for proposals from the European Commission to launch a pilot project in six languages (English, French, German, Romanian, Portuguese and Polish) in early 2021.

This new joint platform follows the same philosophy of cooperation of European media as Infomigrants, which was launched in 2017 by France Médias Monde, DW and Italian press agency ANSA. At a time when the situation regarding migrations is spurring an increase in the number of tragedies on Europe’s doorstep, and the health crisis is putting these vulnerable populations in an even more fragile position, this platform providing reliable information in five languages is becoming more essential than ever. In 2019, Infomigrants reached 76,5 million people and nearly 50 million in the first half of 2020 alone, showing that its usefulness in the media landscape is unrivaled.

The seminar also provided an opportunity to assess +90, the YouTube channel in Turkish set up by DW with other international partners including France 24. This year, the channel stepped up its contributions on several topics, and will continue to increase its contributions to the platform. Less than 18 months after its launch, +90 has reached more than 330 000 subscribers and 630 million streams.

In the first half of 2020, France Médias Monde’s and DW’s content across all platforms combined was viewed about 2 billion times a month on average.