Florence Kasumba: Between Germany and Hollywood

Actor Florence Kasumba is successful on both sides of the Atlantic, starring in Hollywood blockbusters and major German TV shows. She spoke with DW about the differences in working in both countries. 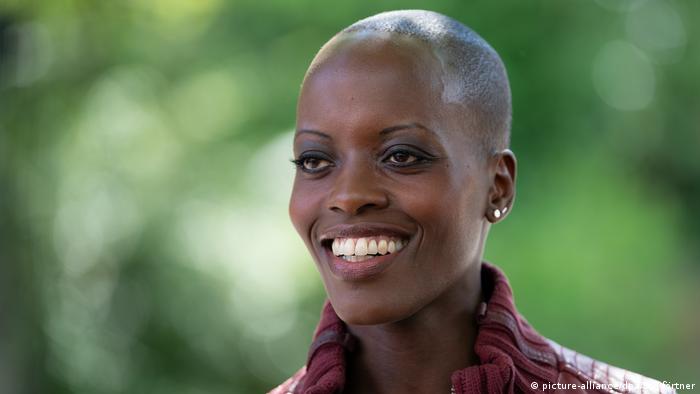 DW: How did you get to Hollywood?

Florence Kasumba: I get this question very often, and it feels a bit strange to me. Yes, I was in a Hollywood film, a blockbuster, but I'm here in Germany and my first Hollywood film [Captain America: Civil War] was shot in Germany. For Black Panther, we all had to fly out to Atlanta, where most scenes of the films were shot. That was my first longer stay abroad for such a large production.

But I like the fact that, after I shoot these films, I can return to my world at home. Simply because I can really relax here and life is different here. There are less paparazzi and I can do what I want. I came to this interview on the subway and no one talked to me.

Does it make a difference for you to work in Germany or in Hollywood? 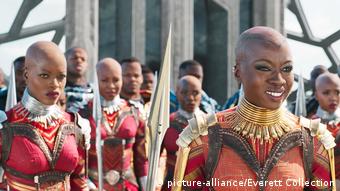 For my preparation it doesn't make any difference. I look at my character and if I have questions, I can ask them. Otherwise, I've often experienced in Hollywood that if there's a larger budget, we are brought in earlier in the process and we're really prepared for the role. That means the training is longer than it is here, whereas here it is simply taken for granted that you need to make it work then and there. You come in, you're shown the choreography and then you do it. I can do both, but I prefer to have a bit more time to prepare.

There's this showdown at the end of Black Panther. The scene is about 16 minutes long. We spent a month shooting it, that's incredibly long. In Germany, we sometimes shoot an entire film in a month. So that's the main difference.

What was particular about the Black Panther shoot?

It was obviously special to act in such a huge film. The people involved were incredibly respectful and hard-working. I've noticed that you can get replaced very quickly if you don't work well right away. I know that from musicals, in which each role is cast to different actors, to make sure that if someone is ever kicked out, the show can go on. 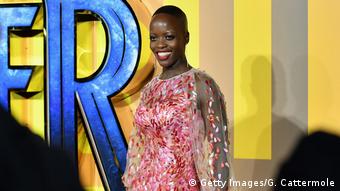 The actress has also performed in musicals

But I didn't know this in the film world, because German productions have a smaller budget. You can't shoot for a week and then say, "that was the wrong person," but that can be done in Hollywood. We had reshoots there, too. That's something I haven't seen in Germany. The entire cast is flown in for three days – and actors come from all over the world. That's never happened to me here in Germany. When we're told the shoot ends on Sunday, I know I could leave on a vacation the next day. But not there.

This year you will be playing a Tatort detective alongside Maria Furtwängler. Is this an unusual experience for you?

Absolutely. I always used to watch Tatort at home. When I shot my first Tatort in 2005, I noticed how much I liked it. In 2010, I appeared in three Tatort episodes and I noticed that I found the work and my colleagues' work interesting. And I was wishing I'd one day become a Tatort detective. And now I'm one of the investigators, and that's special, because I'm sure it wasn't an easy decision [for the producers].

In your previous Tatort appearances, you were sometimes cast as a suspect or a criminal, often in roles of a migrant. How does it feel to now be investigator Anais Schmitz?

I'm happy about it. My appearance or my origins didn't play a role in theater productions, but I remember my first TV roles were sometimes post-synchronized, because it felt "disturbing" if someone looking like I did could speak perfect German. I didn't understand this because I know so many people who, like me, grew up in Germany, who are my age and are the second generation of immigrant families and who simply speak normal German. 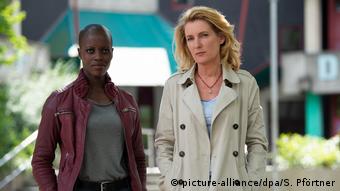 Alongside Maria Furtwängler while filming Tatort

I'm happy that Germany is now going in another direction. A lot is happening right now. (Since I also work a lot abroad, of course, such offers were different from the very beginning. So if I now wish to play the girl next door, that's a role where I say "Yes, I want to play that, just a normal role" —  that was never an issue abroad. And I wish for all the other people, for everything that now comes, that one sees more diversity.)  And that will come, I see that already now and there's still a lot more possible. I hope that people dare to give a role to a person wearing a headscarf or someone who is black or someone with a disability a role without having to explain anything. Because these people are also normal in our lives.

Do you consider yourself a role model for others?

When the movie "Black Panther" came out, of course many young people saw the movie and viewed people with my skin color who were playing positive roles and are now role models so to speak. It's incredibly important that you can say "Wow, I saw this person now" and then when you research "Who is she" and "Where does she come from," you see that you can also be successful with this look. That's the message for me at the moment, just to say "You have to stay true to yourself." Of course, you need a lot of patience, and it doesn't come overnight, but you can't give up. And the more you show people like me, the easier it becomes for people to understand: Oh, ok, that's how it is these days and that's the normal picture we have here in reality. And why not on television, too?

Florence Kasumba has acted in blockbusters including "The Avengers" and "Black Panther." As she picks up the lead as a detective in "Tatort," we revisit 10 things you need to know about Germany's longest-running TV show. (06.07.2018)