Flight MH370: Malaysia 'almost certain' debris is from a Boeing 777

Malaysia has said it is "almost certain" that debris found washed up on Reunion island is from a Boeing 777 aircraft. Officials are investigating whether it might have belonged to missing Flight MH370. 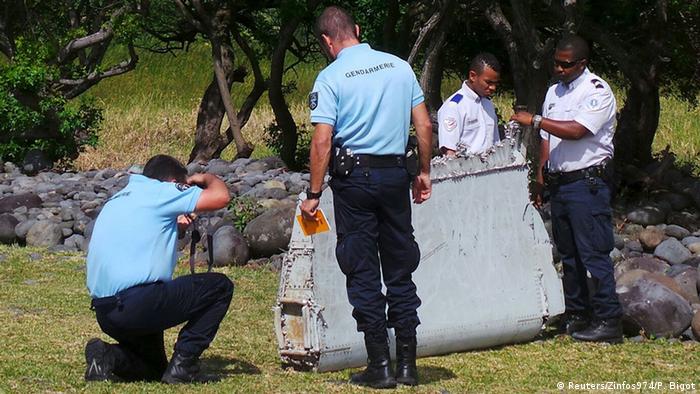 The two-meter (two-yard) long piece of wreckage was discovered near Saint-Andre, on the eastern side of the French territory island off the east coast of Africa on Wednesday.

"It is almost certain that the flaperon is from a Boeing 777 aircraft. Our chief investigator here told me this," Malaysia's Deputy Transport Minister Abdul Aziz Kaprawi said on Thursday.

A flaperon is a moving wing surface found close to the fuselage of a plane.

Australian Transport and Infrastructure Minister Warren Truss said the discovery was a "very important development" in the search for Flight MH370, which was an aircraft of the same type.

Australia has been leading search efforts over more than 50,000 square kilometers (19,000 square miles) of the southern Indian Ocean since the plane's disappearance in March 2014.

Truss told reporters on Thursday that a number stamped on the debris may help to quickly identify the aircraft. He said the number, BB670, was not a serial number but could be a maintenance number.

Australian scientists are now reportedly looking at photographs to determine whether barnacles attached to the debris correlate with the amount of time that it would have been in the ocean.

Truss also said on Thursday that the find, if it was wreckage from the missing aircraft, "starts to provide some closure for the families of the MH370 passengers."

Some relatives said they had mixed feelings at the news as they struggle between finding closure and holding out hope that those on board may still be alive.

"I hope we can confirm this is from MH370," said G. Subramanian, whose son S. Puspanathan was on board.

"I want closure to this mystery. But we hold to the belief that Puspanathan is still alive," he told AFP news agency.

Many relatives of the missing passengers have criticized Malaysia over the handling of the disaster because of the lack of discoveries made by investigators.

Officials believe the plane, which was carrying 239 passengers, was flown thousands of kilometers off course before crashing in the Indian Ocean.

No remnants of the aircraft have been found and its disappearance remains one of aviation's biggest mysteries.

Investigators have been dispatched to Reunion island to find out if debris came from missing Malaysian Boeing 777. No verified trace of the plane has been found since it mysteriously disappeared last year. (30.07.2015)