A deadly fungus wiping out fire salamander populations across Europe has expanded in Germany. Researchers warn the amphibian could be decimated. 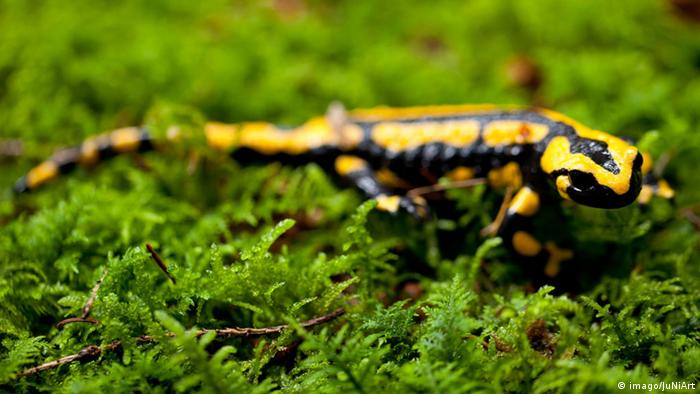 The forgotten fish: a new look at our underwater friends

Fish are one of the most misunderstood species of the animal kingdom. Long believed to be unfeeling, primitive creatures, scientists are now discovering that fish feel pain and are sensitive social beings. (25.08.2017)

Brown bears have largely vanished from Europe over the past 12,000 years. One reason: warmer winters discouraged females from bearing cubs as they used energy to sleep rather than go into deep hibernation in the cold. (07.09.2017)

Europe may be looking at the end of the economically and ecologically valuable ash tree, according to new reports. The prized tree is under attack from invasive insects and fungus. (03.04.2016)

The average temperature of the North Sea has risen twice as fast as the oceans of the world. The changes are likely to alter the ecosystem and endanger indigenous fish such as cod. (09.09.2017)

Save our frogs because they may save us

A chemical found in the mucus of frogs has been found to kill certain strains of the influenza virus. The discovery could lead to the development of powerful anti-viral drugs. But many species are at risk of extinction. (19.04.2017)

A deadly flesh-eating fungus responsible for decimating fire salamander populations in Europe is spreading in Germany, according to researchers.

The Batrachochytrium salamandrivorans fungus first arrived in Europe from Southeast Asia in 2010, wiping out fire salamander populations in Belgium and resulting in severe declines in the Netherlands.

It was first detected in western Germany's Eifel region in 2015, but has recently been found in Essen, nearly 100 kilometers away (60 miles).

"This is a rapid spread and it can occur throughout the country," Sebastian Steinfartz, a researcher at TU Braunschweig's Zoological Institute, told news agency DPA.

The black-and-yellow spotted fire salamander is one of the best-known species in Europe.

The fungus causes skin ulcers and tumors that make the fire salamanders susceptible to other diseases. It is highly virulent and spreads rapidly thanks tothick spore walls that increase its longevity.

A study in the journal Nature published in April warned that infected fire salamander populations dropped by 90 percent before eventually being wiped out.

The pathological fungus can spread through the soil, water and air. Birds and frogs also carry the fungus. Other amphibians like newts and toads are also susceptible to the fungus and carry it.

It is believed the fungus spread to Europe through the forestry, agricultural and wildlife trade.

The Nature study found that sexually mature fire salamanders were particularly susceptible to contracting the fungus because they come into contact with other fire salamanders. This, in turn, furthers pressure on the species.

Scientists are worried that fire salamanders could be completely wiped out as they have no immune response and there is no easy way to stop the fungus from spreading.

Matthew C. Fisher, an expert in fungal epidemiology at Imperial College London, in a comment published with the Nature study suggested the only way to save salamanders in Europe may be to keep a population in captivity until the fungus is controlled or a cure is found.