Fleeing Afghanistan: From Kabul to Ramstein in Germany — but what then? | Germany | News and in-depth reporting from Berlin and beyond | DW | 17.09.2021

Fleeing Afghanistan: From Kabul to Ramstein in Germany — but what then?

Thousands of Afghan refugees have landed at the Ramstein US Air Base in Germany. The huge tent city is to be evacuated by the end of September. But where they end up is often a question of luck. Ramstein, Germany. At last. For two years, Zarah* had been in hiding in Afghanistan before she and her three small daughters made it from Kabul to Qatar in a breakneck operation on one of the last evacuation planes at the end of August.

After that came the flight to Germany, to her husband, who had worked for years for a German development aid organization as a local worker and was waiting for Zarah to join him.

He was supposed to fill out the paperwork at Ramstein, southwestern Germany, the largest US airbase outside the United States, and then, finally united as a family, start a new life. After all, the most difficult part of the journey, fleeing her homeland, was already behind her. What could go wrong?

But that did not work out. Zarah is now thousands of miles away in Indiana, in the US Midwest, in a camp with 6,000 other refugees. "It's crazy. You get the feeling it's a bit like a lottery where people end up," one staff member at a German aid organization that has been dealing with Zarah's husband's case for years, who told DW the family's story and who wishes to remain anonymous.

The US flew tens of thousands of people out of Afghanistan in August, as did several European nations after the Taliban seized control of Kabul. Ramstein is still serving as a hub for those people, with 9,000 people currently on the ground.

Zarah, an Afghan, spent five days at the US base, during which she and the aid organization accumulated a long list of institutions she asked for help to stay: The Interior Ministry, the district government of a small German town, the registration office for foreigners in Germany, the German Corporation for International Cooperation (GIZ), the German Embassy in Qatar, and the Federal Office for Migration and Refugees. To no avail. The problem was that her husband's asylum case had not yet been processed, so he has not yet been able to apply for family reunification. 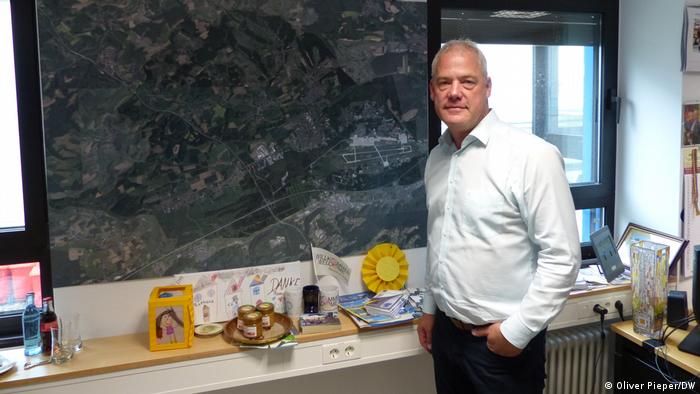 Ralf Hechler, the mayor of Ramstein-Miesenbach, says cooperation with the US military has always been good

When things go badly and German bureaucracy gets in the way, as it did with Zarah, Afghan refugees are flown on elsewhere, often for security checks, to a place where they may never have wanted to land: Albania or even Rwanda. From there, they can continue their journey to the United States. If things go smoothly, Ramstein becomes the hub for a happy ending.

The US military base in southwestern Germany resembles a fortress these days; it is almost impossible to gain access to the huge tent city, which has been set up for tens of thousands of Afghan refugees in record time.

Ralf Hechler is one of the few to have been allowed onto the site. The base's commander, General Joshua Olson, gave him a ride in his car. "You can't imagine it, you have to see it," Hechler says. "Two and a half kilometers of tent upon tent, shower containers, brand new toilets, water supply. And a third of the refugees were children and teenagers." Some 70 female soldiers from the German Bundeswehr are being specially deployed to Ramstein to look after Afghan women and children. 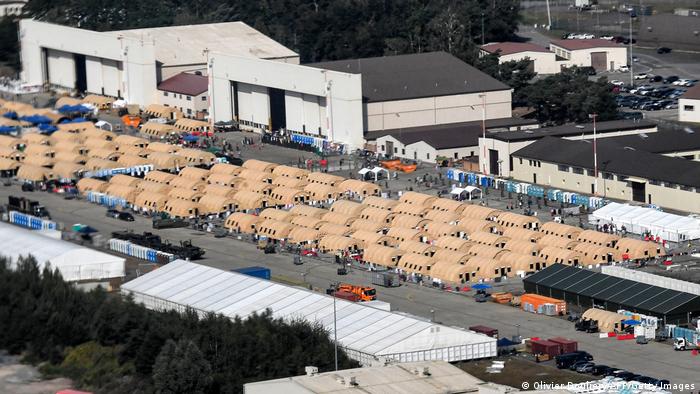 Hechler has been mayor of Ramstein-Miesenbach for five years, making him the first neighbor of the 1,400-hectare airbase. German-American friendship is in his blood: His great-grandfather once returned to Germany from New York and settled in Ramstein, and now he is the man General Olson calls first when even the US logistics department reaches its limits.

That was the case in the first days of the evacuation of Afghan refugees when suddenly thousands of people had to be fed from one day to the next. "We then drove 6,000 meals to the barracks — vegetable lasagna, cheese spaetzle, stuffed peppers, all vegetarian."

Hechler gets into the fire truck four times on a Sunday to take the meals to the US base. The mayor also launched an appeal on Facebook, and, just a few hours later, mountains of clothing, food, and toys for the refugees piled up downtown.

Some 2,350 people from Ramstein alone do civilian work at the airfield. There is probably no place in Germany that has been so closely linked to the US since the military base began operations nearly 70 years ago. Every store in town, no matter how small, advertises in German and English; there are now more than 50,000 US forces living with their families in the surrounding Kaiserslautern region.

Ralf Lessmeister deals with them practically every day; he has been the district administrator of Kaiserslautern since 2017 and, like Hechler, is one of the first points of contact for the US military. He talks to the air base's liaison office on the phone every day, and he's happy to answer the phone on weekends too. Lessmeister was called upon when five Afghan refugees who had landed in the US were found to be infected with measles.

"For the first 100 doses of vaccine, we raided our large pharmacy here at the hospital and brought it to Ramstein within two hours," he says. Because all 9,000 refugees currently still at the military base need to be vaccinated on a fast-track basis, evacuation flights have been suspended for now.

By September 30, Lessmeister says, the US still wants all refugees flown out, which seems optimistic, to say the least. "The clock is ticking," he says. It was originally agreed with Germany that those in need of protection would spend no more than ten days at the military base, but the measles outbreak threw a wrench in that plan. 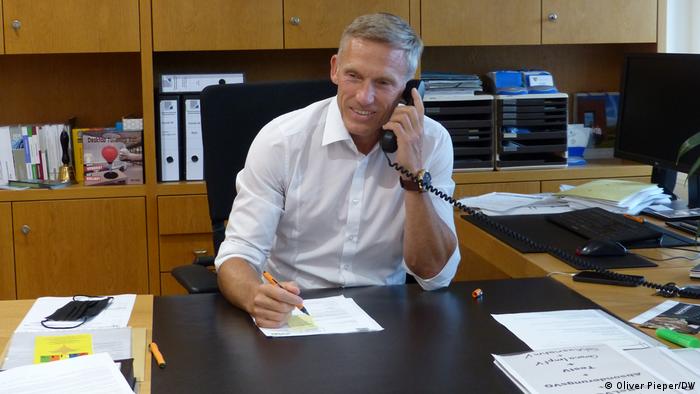 Ralf Lessmeister says he's used to be in the international focus

First refugees wait for their asylum decision in Germany

The district administrator and his team also had to attend to medical emergencies; 20 seriously injured people, victims of the Kabul terrorist attacks, were transported to surrounding hospitals and to the neighboring state of Saarland. Lessmeister also keeps an eye on the refugees who have applied for asylum in Germany in Ramstein and are now waiting for their decision at reception facilities in the towns of Kusel, Trier, or Bitburg.

Regensburg-based Philipp Pruy is a specialist lawyer for migration law currently representing more than 100 Afghans, people who have just arrived from Afghanistan, or people whose asylum application has already been rejected once and who are now making a follow-up application.

"In past years, the chances of success for these asylum applications were pretty mixed, even though people claimed persecution by the Taliban even then," says Pruy, "Until then, the courts argued that they had an alternative escape route in the country itself, i.e. to Herat, Mazar-i-Sharif or Kabul."

The lawyer says German courts ignored how the situation in Afghanistan was deteriorating until the very end. The case of 23-year-old Said made headlines because he was one of the last Afghans to be deported to Kabul at the beginning of July after Pruy had exhausted all legal means.

"The chances for Afghan refugees to get asylum have improved considerably since the Taliban took power," says Pruy. "If they are deported, the people face inhumane, degrading treatment."

The remaining 9,000 refugees at Ramstein are mostly Afghans who have been local staff supporting the United States. But Pruy is convinced that they would also have a good chance of being granted asylum in Germany. The military base is on German territory, so the refugees would be entering European soil and the Dublin Regulation would apply.

"All you have to do is approach the federal police officers on the grounds of the military base and utter the word asylum, and the federal police would then have to pass the asylum application on to the Federal Office for Migration and Refugees," the lawyer says. "And people will probably think about applying for asylum in Ramstein before going to Albania or another third country."

*Zarah is a pseudonym. DW is withholding her real name for security reasons.

Exclusive: Afghans should be 'sent back at the border,' says AfD lead candidate Tino Chrupalla