Both in desperate need of a Europa-League win, Wolfsburg and Gladbach picked up three points in two goal-rich victories. Wolfsburg worked hard to overcome Krasnodar 4-2, while Gladbach eventually won 5-0. 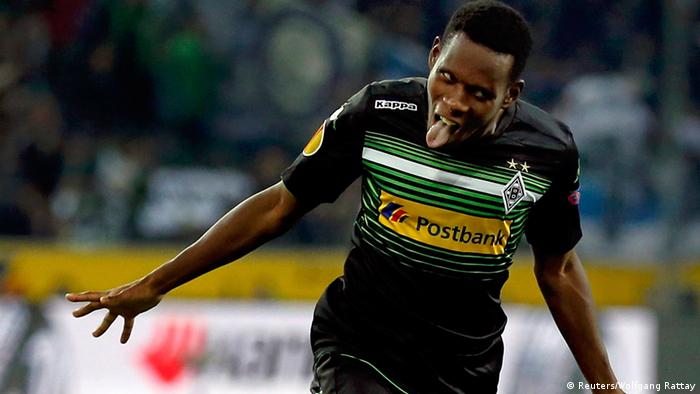 Gladbach started brightly and after Max Kruse tested Bruno Vale in the Apollon goal, Ibrahim Traore opened the scoring for the home side. A defensive error was seized upon by Oscar Wendt and Traore, after a neat pass by Branimir Hrgota, applied a low finish from just outside the area to make it 1-0 after only eleven minutes.

Apollon didn't sit back and always looked to break quickly, but misplaced far too many passes to pose a real threat to Yann Sommer's goal. Max Kruse was denied by a brilliant reflex save from Bruno Vale, before a lively Traore fired wide. 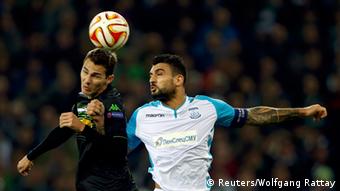 No second goal for Gladbach meant Apollon improved and while their efforts remained speculative, Gladbach's dominance was easing off. Just before the break, Traore slipped an excellent ball through for Hrgota. The Swede's strike was well saved and the rebound fell to Hazard, but the Belgian fluffed his lines.

Hugo Lopez nearly nabbed an equalizer for the visitors at the start of the second half, but Yann Sommer stayed big to deny the striker. Just as the momentum was swinging in favor of the guests, Gladbach finally got their second. Branimir Hrgota reacted quickest after Traore's shot was saved and the ball trickled in at the near post.

Spurred on by the relief of finally scoring the second, Gladbach relaxed and started to control the game again. Inside the final 25 minutes, Traore, in almost identical fashion to his first, scored his second to end the contest. Substitute Patrick Herrmann clipped in a fourth at the near post after a cross from Hazard, before the Belgian saw his shot from the angle deflect in off Angelis Charalambous to seal a 5-0 final scoreline.

With Villarreal also winning, Gladbach's first Europa-League victory this season sees them climb into second spot in Group A with a much healthier goal difference. 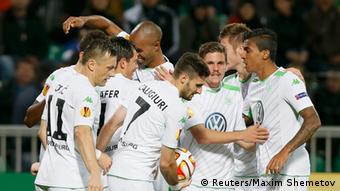 Krasnodar were the more active side from the start, Naldo doing just enough to distract Mauricio Pereyra from getting his shot on target. Ari kept posing a problem in attack and his flick for Ricardo Laborde nearly resulted in the opener, but the winger found the wrong side of the netting. Diego Benaglio then had to claw off the line after Ari's flick left Robin Knoche standing.

A slight lull in play was abruptly ended when Wolfsburg took the lead. Neat passing on the edge of the area ended when Kevin de Bruyne was found and his shot was spilled by the sprawling feet of Dykan in the Kransodar goal. Ivica Olic was in the right place and, taking a bang to the knee in the process, the Croatian applied enough pressure to captain Andreas Granqvist so that the defender sent the ball past his own keeper.

Building on their first lead in the Europa League this season,Wolfsburg had goalkeeper Benaglio to thank for it staying 1-0 at the break - the Swiss stopper keeping out the lively Ari.

Goal flurry in second half

Holding only a narrow lead, Wolfsburg couldn't have wished for a more perfect start to the second 45 minutes. Kevin de Bruyne finished a strong solo run with a neat finish at the near post to double the visitors' lead after only a minute of second-half football. 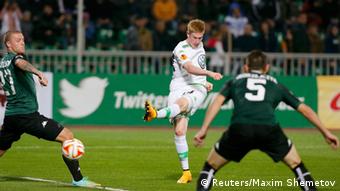 Within five minutes though, the home side had pulled one back after a controversial penalty. Naldo was harshly judged to have handled the ball when it appeared to hit his shoulder, but Granqvist made no such mistake from the spot.

With the next goal potentially decisive, Wolfsburg's Luiz Gustavo delivered the knock-out blow shortly after the hour mark. The Brazilian midfielder took one touch on the edge of the area before curling a weighted effort into the far corner.

Benaglio denied Odil Akhmedov, but as the hosts kept searching, Belgian de Bruyne once again took advantage on the break, finishing well to make it 4-1 after a neat one-two with substitute Vieirinha.

With the game all but won, Wolfsburg got sloppy and afforded Krasnodar too much space - substitute Wanderson poked home to reduce the deficit by one. In stoppage time, Benaglio saved on the line to make sure seven goals weren't scored on the night.

The three points are much needed for Wolfsburg. Their first Europa-League victory of the season leaves them in second in a very tight Group H.