First transsexual lawmaker in Poland to push for minority rights | Europe| News and current affairs from around the continent | DW | 17.10.2011

First transsexual lawmaker in Poland to push for minority rights

Poland's voters have elected the first transsexual to parliament - Anna Grodzka, an activist and film producer who says she is ready to push for same-sex civil unions and state funding for sex change operations. 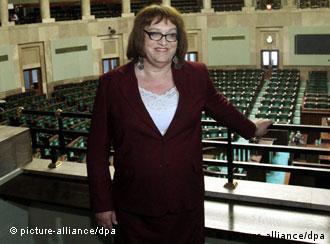 Anna Grodzka was elected on October 9 to represent the city of Krakow as part of Palikot's Movement, a new socially liberal party led by controversial business tycoon Janusz Palikot. She has received massive media attention in Poland and abroad, and has used it to draw attention to the plight of sexual minorities in her conservative and Catholic country.

"Enough of this concealing of the truth," 57-year-old Grodzka told the Associated Press on Monday. "This group of people, even if small, has its rights and they should be respected. They should not be pushed into oblivion." 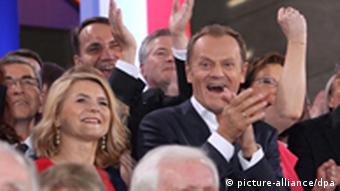 Grodzka, an activist and film producer, said the time has come for gay, lesbian, bisexual and transgender Poles to enjoy the right to legally recognized partnerships, job security and state funding for sex change operations - her own was completed in Thailand last year.

Speaking in an interview with the Polish web portal Gadu-Gadu, Grodzka also said she planned on introducing a law similar to one passed recently in Australia that would allow Poles to select "male," "female" or "other" as their gender on their passports.

The elections last week did not change the government's make-up - the centrist, pro-market Civic Platform is to continue governing under Prime Minister Donald Tusk with the support of the small, farm-based Polish People's Party.

But Palikot's Movement gained 40 seats in the 460-member parliament, making it the third-largest party after the conservative Law and Justice party - a sign that the social conservatism espoused by many Poles no longer has the influence it once did in politics.

Also elected to parliament was Poland's first openly gay man, activist Robert Biedron, who called the election a "sign that we are a different society now, open and tolerant."

Grodzka said she has received hundreds of friendly gestures from supporters and only one hostile phone call - evidence, she said, of a growing comfort among Poles with sexual minorities. Despite her party being a relatively small bloc in parliament, she said she was ready to represent her constituents when she is sworn in on November 8.

"I also will simply be myself, and I will show that unfavorable opinions about me are unjust," she said.

Poland's prime minister made history Sunday by becoming the first incumbent leader to win re-election since the collapse of communism. This victory is a blessing for Polish-German relations, writes DW's Bartosz Dudek. (10.10.2011)

Polish Prime Minister Donald Tusk made history Sunday by becoming the first incumbent leader to win re-election since the collapse of communism over two decades ago. (10.10.2011)