First Group of Iraqi Refugees Arrives in Germany | Germany | News and in-depth reporting from Berlin and beyond | DW | 19.03.2009

More than 100 Iraqi Christians have arrived in Hanover. They're the first wave of a contingent of 2,500 Iraqis expected to relocate to Germany as part of a program sponsored by the UNHCR. 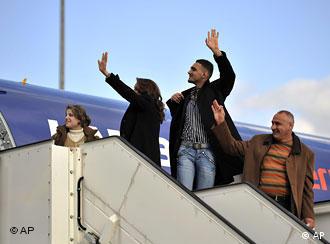 The Iraqi refugees are hoping for a better life in Germany

The first group of Iraqis to arrive in Germany had previously been living in refugee camps in Jordan and Syria. Upon their arrival on Thursday, March 19, they will initially be housed in northern Germany and issued with three-year, extendable residency permits.

That means their chances of successfully integrating into their new community in Germany will be better than many other Iraqi refugees who've been here for much longer, but who've been forced to live on the periphery of society, asylum experts say. Many of them have only a Duldung -- a certificate that states that they are in Germany illegally, and that their deportation has been put off indefinitely.

The continuing civil war in Iraq prevents refugees from being sent back to their homeland; a situation that isn't likely to change anytime soon.

"We think that it is only fair to issue the Iraqis who are living here illegally with a residency permit," said Kai Weber of the refugee council in the state of Lower Saxony.

Weber would like to spare asylum seekers a fate like that of Ghassan El-Zuhairy, an Iraqi who fled his country in 2002 and his since been living in Lower Saxony without a residency permit. Because of his status, he is not allowed to move freely within Germany -- a restriction that cost the trained metal worker his job once it became clear he would not be able to travel to other German states to deliver parts to customers. Now, El-Zuhairy is on welfare, and deeply unhappy. 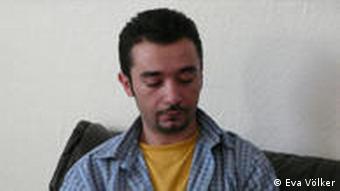 Ghassan El-Zuhairy has been disappointed by his experience in Germany

"I don't have any plans at the moment," he said. "I can't live without goals, because I get ill -- mentally ill."

El-Zuhairy took it upon himself to learn German because his status doesn't give him the right to attend German language classes.

It's an intolerable situation, Weber said, referring to the Iraqi refugees now arriving from Syria and Jordan.

"You can't say that because of the situation in Iraq we'll take in these victims of war, while at the same time, you're thinking concretely of how you can one day send them back to their country," Weber said. "From our point of view, this just doesn't work. We have to have a concept of how to offer these Iraqis a real chance at a life in Germany."

Germany must do more, expert says

While Lower Saxony's refugee council welcomes the German government's willingness to resettle 2,500 Iraqis, Weber says that number is just a drop in the ocean when seen against the 2.5 million Iraqis in refugee camps in Syria and Jordan.

"It doesn't really help to ease the suffering, but it's a sign of good will," he said. "But we shouldn't leave it at that. To really make a difference, Germany should take in 10 times that amount."

In total, the resettlement program sponsored by the UN High Commissioner for Refugees will help 10,000 Iraqis relocate to Germany and elsewhere in Europe. Britain, Denmark, Finland the Netherlands, Norway and Sweden are also involved in the scheme.

Most of those receiving help from Germany are members of Iraq's Christian minority, which has faced years of violence and intimidation from Islamic extremists.

The people selected to take part in the program must fit criteria established by the German government and the EU. They must have a clean criminal record, for example, and not have been members of Saddam Hussein's former Baath party. Single mothers, post-traumatic stress sufferers and those with family ties to Germany also had a greater chance of a successful application.

The first of 2,500 Iraqi refugees have arrived in Germany, where they'll follow in the footsteps of many migrants before them. They'll stay in the Friedland camp, which has housed 4 million refugees since World War II. (19.03.2009)

Germany's highest ranking diplomat, Frank-Walter Steinmeier, has wrapped up his two-day trip to Iraq with a visit to the Kurdish north of the country. But not all Iraqis agree with all aspects of Germany's policy. (18.02.2009)

Germany's state interior ministers have given their backing to German interior minister Wolfgang Schaeuble's plans to accept up to 2,500 Iraqi Christian refugees in the framework of a European Union agreement. (21.11.2008)